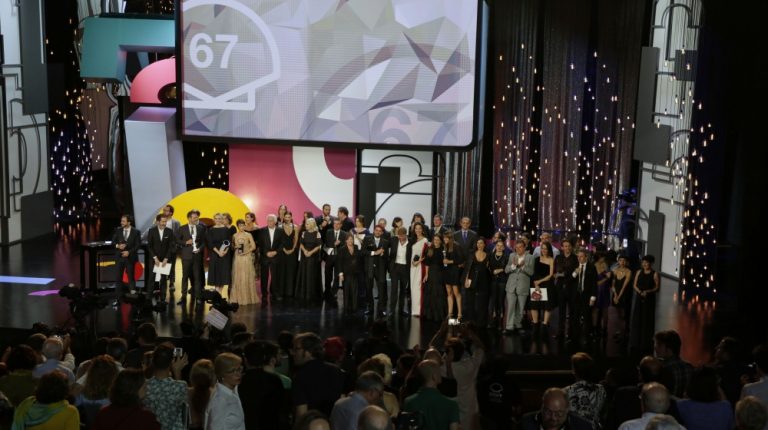 Spanish actress Penélope Cruz was awarded on Saturday the Donostia Award at the 67th edition of the San Sebastian Festival, which also featured her image on its poster.

Cruz received the award from British band U2 Bono front man, Bono, who acknowledged her humanitarian work on and off screen.

She also expressed her “boundless gratitude” for the award which she dedicated to her parents, and to the directors Pedro Almodóvar, Bigas Luna, and Fernando Trueba who have trusted her throughout her journey.

Before ending her speech, she voiced her condemnation of male violence against women saying, “This year alone, 44 women have already been murdered as a result of male violence, and since 2003, the number of deaths amount to more than a thousand in our country alone.”

“How many must there be in the world? When a woman finds the hugely enormous strength that it takes to speak out about living in a situation such as this, I hope that you listen to her straight away and not when it’s too late”, she added.

Aged 45, Cruz is the youngest actress to have received the Donostia Award. She received the Best Supporting Actress Academy Award and Bafta for her part in the film Vicky Cristina Barcelona, the Best Actress Award for her lead role in the film Volver at the Cannes Festival, the honorary César, and many other awards.

During the festival, The Brazilian drama Pacified, directed by the North American Paxton Winters, was announced as the winner of the festivals Golden Shell for Best Film

As well as carrying off the Festival’s highest accolade, Pacified garnered another two recognitions: the Best Actor Silver Shell for Belgian Actor Bukassa Kabengele and the Award for Best Cinematography going to Cinematographer Laura Merians.

On the other hand, the Silver Shell for Best Director went to the trio made up of Directors Aitor Arregi, Jon Garaño, and Jose Mari Goenaga, for the film The Endless Trench from Spain, which also bagged the Best Screenplay Award for Screenwriter Luiso Berdejo and Actress Barbara Goenaga.

In addition, Actresses Greta Fernández and Nina Hoss, the respective stars of the Spanish film La hija de un ladrón and the German-French film The Audition, carried off the Silver Shell for Best Actress ex aequo.

Finally, the French-German film Proxima by Director Alice Winocour, landed the Special Jury Prize “for its aesthetic ambition” and “turning a drama of space exploration into an exploration of motherhood.”

The Chilean film Some Beasts won the Kutxabank-New Directors Award, and in the same section a special mention went to the Bulgarian-Qatari film Sister by Director Svetla Tsotsorkova.

The Horizontes Award was presented to the Argentinian film Again Once Again, while the special mention went to Writers and Directors Daniel and Diego Vega brothers for the Peruvian-Colombian film La Bronco.

The Zabaltegi-Tabakalera section was carried off by the German Actress Angela Schanelec for the German-Serbian film I Was at Home, But, and the special mention fell upon the French-South Korean film Isadora’s Children by Director Damien Manivel.

The film, The Endless Trench, won the Irizar Basque Film Award, while the film Glittering Misfits, by Director Iban del Campo, obtained a special mention. The City of Donostia/San Sebastian Audience Award went to the French film The Specials by Directors Olivier Nakache and Eric Toledano, while the Audience Award for Best European Film was carried off by the British-French film Sorry We Missed You by Director Ken Loach.