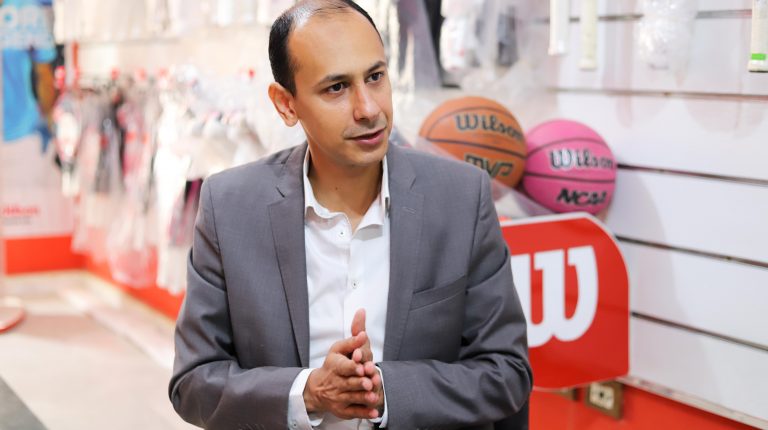 Alyan Company, the agent of Wilson Sporting Goods and Technifibre in Egypt, currently holds the sponsorship rights of the unified balls of several local leagues in Egypt, including basketball, tennis, squash, golf, and American football, and is now negotiating to add handball to the list.

Daily News Egypt interviewed Karim Alyan, CEO of the company, to learn about their activities and future plans.

Can you elaborate on the company’s start in Egypt?

The company has been working in commercial agency for 25 years, starting with Technifibre, which produces squash equipment, then a significant development happened to the company. We had a contract with the Egyptian Tennis Federation to make Wilson Ball the official ball of the Federation in 2015. This was a significant shift in the company’s sales.

How many outlets does the company have?

The company has opened six commercial centres so far, all dedicated to our products, of which two centres are in Alexandria and four in Cairo. It deals with about 92 distributors covering all the country.

How much is your business in the tennis equipment industry?

The company entered several tenders for tennis equipment, and won the supply rights of tennis and squash equipment for major clubs, such as Al Ahly, Zamalek, El Gezeira, and Heliopolis. The prices of tennis rackets vary according to the level of players; a beginner can buy a racket for EGP 500, while more advanced players can get the racket for EGP 1,000-2,000, and a professional tennis player buy it for EGP 5,000. The average price of a tennis ball is EGP 27. Our annual sales reach 25,000 pieces, 90% of which are balls.

What about your contract with the Egyptian Tennis Federation?

Our sponsorship contract with the Egyptian Tennis Federation stipulates the provision of EGP 300,000 worth balls. This value also applies to the Squash and Basketball federations. We offer them a discount of up to 50% in clothing, with full sponsorship for the top five players. For players ranking from fifth to tenth, the company offers a 70% discount on its products. Over the past few days, we have offered players and coaches all products with a 50% discount, and achieved outstanding sales. The company plans to repeat this on a quarterly basis. Currently, our contract with the Tennis Federation has been suspended since the current board assumed the responsibility, but we still work with players and clubs.

What about the golf?

As for golf, our work started in August 2018. There are 12 golf clubs in Egypt, and Wilson controls 70% of them. We offer the Egyptian Golf Federation and clubs a discount of up to 40%. It is a very expensive game and most of the players in Egypt are foreigners. In Egyptian tournaments, there is only a 1% participation rate. Sponsors are few and there are no programmes for youngsters, which is a major problem. We have achieved outstanding sales thanks to our discounts, each golfer has a bag of 14 rackets, the prices of each ranges between EGP 12,000-40,000, and the ball pack that consists of three balls costs EGP 100.

Can you elaborate on your agreement with the Egyptian Basketball Federation?

The company negotiated with the Vice President of the Egyptian Basketball Federation, Mohamed Abdel Mottaleb, and made an offer that includes the provision of 350 balls for the federation for EGP 400,000.

What about the company’s activities in the American football?

Wilson provides the official football of Egypt’s American football league, and the game comprises of six clubs. We’ve been working in this sport for three years. WE offer up to 50% discount for the players and clubs.

How does the company support squash in Egypt?

Egypt has international excellence in squash and is among the top ten ranked countries worldwide. There are four major squash players in Egypt who wear clothes and use rackets made by Technifibre, and we have its agency in Egypt. The price of a squash racket ranges between EGP 900-2,500, while its sports clothes cost EGP 800 per piece, and shoes cost EGP 1,700 per piece.

Do you have other products?

We provide all the needs of athletes, so the company also sells fitness equipment.

Have are the company’s other activities?

The company has two tennis academies. One in Katameya Gardens and another in Fifth Settlement, both bear the name Wilson. They aim to prepare young champions. The budget of each academy reaches about EGP 500,000 annually. There is an entity named the Egyptian Tennis Association that organises minor tournaments. The company provides 60% of the value of their prizes and balls. We also participated in sponsoring the Arab Basketball Championship.

Do you have any commercial agencies for football equipment?

We have the commercial agency of Edwards Sports which provides nets for all games, and it is a large brand that is accredited worldwide.

What are your future plans?

The company has made an offer to the Egyptian Handball Federation to be the official sponsor of the game and provide the official ball for local competitions. The negotiations are in progress and both sides are optimistic about reaching an agreement soon.

What are the best-selling products at your stores?

Tennis equipment are the best-selling. The company’s sales this year reached EGP 25m.

What about the company’s investments and labour?

The company’s investments are EGP 35m. We have 250 employees distributed between the company’s headquarters, commercial centers, and academies.

What the problems that you face in the market?

The Minister of Industry’s recent decision to protect locally made products caused us some troubles. We have been trying for a year and a half to register our trademark to obtain a licence to import our products. The delay in getting this licence costs us 100% fines and customs. We are waiting the authorisation from the General Authority of Exports and Imports, but the producers are taking too long.

Do you have e-marketing plans?

The company is moving strongly towards e-marketing. We cooperate with Jumia, Souq.com, and soon with Noon.com.

Have you thought about setting up a factory in Egypt?

Six months ago, we have tried to open a factory to produce tennis balls here since we’re targeting the MENA region, but it turned out to be too expensive. The factory was going to cost about EGP 23m. We were surprised by the high price of the land and the difficulty of procedures, and the fact that the overall cost would amount to EGP 80m, so we cancelled the project.

Notes from America: The tragic journey of Aylan Kurdi

Ford to launches 2 new cars in next few months