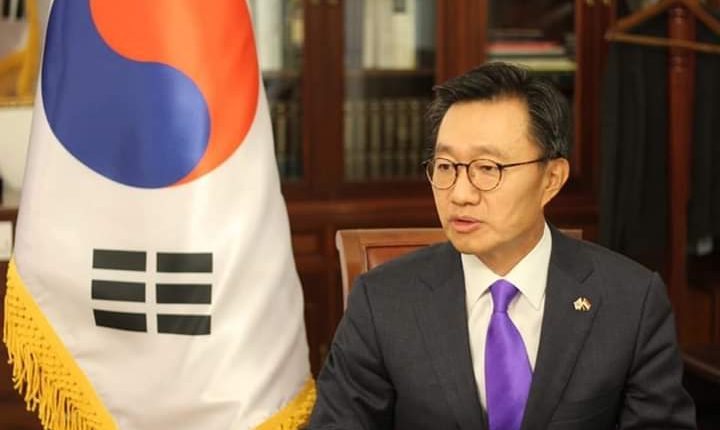 South Korea and Egypt will take their relationship to a higher level in 2020, marking the 25th anniversary of establishing diplomatic relations between the two countries, the Korean ambassador to Egypt, Yeocheol Yoon, told Daily News Egypt, on the occasion of Korea’s national day on Thursday.

Egypt has just received a Korean business delegation with the full spectrum of major Korean companies, the ambassador said.

When President Abdel Fattah Al-Sisi made his historic visit to Korea in March 2016, both sides adopted the Comprehensive Cooperative Partnership which serves as the platform for bilateral cooperation in many areas.

The Korean business leaders clearly showed their keenness to work with their Egyptian partners, and to help them turn the immense potential of Egypt into reality by sharing a common strategy for their cooperation in key areas, the ambassador stressed.

The Korean delegation was deeply impressed by President Al-Sisi’s strong leadership and vision to make Egypt a hub of trade and industry in the Middle East and Africa, encouraging the visitors to work on the Egyptian file, the ambassador said.

“Taking this opportunity, I would like to express sincere appreciation to the Minister of Finance, Mohamed Moeit, for everything he has done to create a better environment for foreign investors, including Korean companies, in Egypt,” the ambassador mentioned.

Korea is the seventh largest trader and 11th largest economy in the world, with a one tenth of Egypt’s area and half of its population, the ambassador said. “We think that our trade with Egypt which now stands at $2.2bn, though a 50% increase from our lowest point in 2017, is not very impressive. I think we can do more,” he added.

According to the ambassador, Korea’s overall trade records $1.14trn, with $605.4bn of exports and $535bn of imports. He explained that Egypt enjoys huge potential with its strategic location, well-educated young population, plentiful resources, and its leading role in the Arab and African world with its vast network in the region and beyond.

“We would like to explore the possibility of concluding a Free Trade Agreement (FTA) with Egypt, so that we can not only provide high-quality products with competitive prices, but also make serious investment in Egypt to introduce production facility and technology of key industries,” the ambassador stated.

The ambassador expressed his hope to truly realize the maximum utilization of both countries’ complementarity for the mutual benefit of their people, as was already reflected on the founding principle of the first kingdom in Korea, “Spread the benefit to all humanity.”

Korea already has the big names of its industry in Egypt, including Samsung and LG. Their plants in Beni Suef and 10th of Ramadan cities, together exported $700m worth products made in Egypt, which accounted for 90% of Egypt’s electronics exports.

The Egyptian Refining Company’s (ERC) plant in Mostorod district with $4.4bn investment, has the Korean main contractor, GS Construction and Engineering, the ambassador said. He added that it will start full production in a couple of months. It will provide a variety of petrochemical products and its diesel fuel production will meet a half of the total needs in Egypt.

“Last year, Korea exported $200m of diesel fuel to Egypt, while with this ERC plant running, we will be happy to see our export decrease dramatically as Egypt’s own domestic production increases,” the ambassador mentioned.

Moving to other cooperation opportunities, the ambassador stressed on the vitality of water resources for the Egyptian people, noting that South Korea’s Doosan Heavy Industries with its expertise in desalination will boost its investments in this area, as it is also famous for other infrastructure experiences, including nuclear power.

Small and medium enterprises (SMEs) also have a large impact on creating job opportunities and developing local communities, the ambassador stressed, referring to the Korean SMEs with their top-notch technology and knowhow, from textile to waste treatment, like Seongan, Ulhwa, and JST that work closely in Egypt.

In addition, the ambassador referred to the $583m assistance project of Korea International Cooperation Agency (KOICA) to Beni Suef Technological University, aiming to provide more useful education for the Egyptian youth, like ICT and Mechatronics, to create more job opportunities and skilful labour.

“I have visited Beni Suef Technological University two weeks ago with Prime Minister Mostafa Madbouly and Minister of Higher Education and Scientific Research, Khaled Abdel Ghaffar,” the ambassador revealed. The project was agreed upon during President Al-Sisi’s last visit to Korea.

The choice of Beni Suef was also aligned with the Egyptian government’s high priority for the development of Upper Egypt, the ambassador said. “I was so happy when Prime Minister Madbouly expressed his appreciation for the project.”

Cultural approach is unique despite the distance

The Koreans and Egyptians are not only sharing common economic interests, but also understand each other very well, despite the geographical distance and different backgrounds, the ambassador stated.

Egyptian youth love K-Pop, K-Drama, and K-Food while Egypt is the leader in the Arab world for music, cinema, literature and other cultural areas, the ambassador mentioned. “Koreans love Egypt’s glorious ancient civilization represented by Sphinx and Pyramids as well as natural beauty of the Red Sea, the Mediterranean, and primal deserts,” he added.

“Egypt’s Minister of Antiquities, Khaled El-Anany, has been promoting the charm of the Egyptian civilization so effectively, all the diplomatic corps, including me and my wife, are your fans. I hope more Koreans will come to Egypt to enjoy the country,” said the ambassador.

The ambassador also illustrated that the public diplomacy team at the Korean embassy came up with the idea of creating a YouTube Series, called “Assalam Alaykum, Cairo” (Hello Cairo), which presents viewpoints of Egyptian young people through their unscripted, free discussion on the subjects of their interest in Korean.

“I was pleasantly surprised by their command of the Korean language to express all their emotions and reactions. This will also impress their Korean friends deeply and bring their hearts much closer to Egypt,” the ambassador asserted.

The team is providing English and Arabic subtitles for other viewers, the ambassador mentioned. “This effort shows our genuine respect for the culture and lifestyle of our fellow Egyptians, our partners into a prosperous and peaceful future,” he noted.

“Last week, I received a congratulatory message from President Abdel Fattah Al-Sisi to his Korean counterpart Moon Jae-in, on the occasion of Korea’s national day, through one of his chamberlains, Hossam Zartar, wishing peace and prosperity for all the Korean people,” the ambassador noted.

The ambassador assured that he appreciates the president’s message which represents the friendship and warm feelings from the Egyptian people to their Korean friends.

The South Korea’s national day is about the first Kingdom on the Korean peninsula in 2333 BC, the ambassador said. “We are now marking the 4,352nd anniversary since my first ancestors proclaimed their ideals of ‘spreading benefits to all humanity’ which I believe is still at the root of the Korean people’s outlook to the world,” he added.

Apart from the history of both countries’ old kingdoms, the year 1919 was a watershed for both countries, he said. The Korean people expressed their determination for independence with their March 1st Movement and the establishment of their provisional government in Shanghai, China. While

the Egyptians also fought for their freedom in the same year, one hundred years ago, and soon achieved their independence in 1922, he stated.

“In the meantime, the untiring efforts of the Korean provisional government brought about the promise that Korea would be free and independent after the Second World War in the declaration adopted by China, the United Kingdom, and the United States on 27 November 1943, here in Cairo,” the ambassador mentioned.

Both countries’ official diplomatic relations started from as late as 1995, more than 50 years after the Cairo Declaration, the ambassador added, asserting that the rapid development of the bilateral relations for the last 24 years was possible probably due to the ties of common history from one hundred years ago.

The Korean government is currently working very hard to achieve a lasting peace in the Korean peninsula and denuclearisation of North Korea, the ambassador said. “We have had three inter-Korean summits and helped two US-DPRK summits. Progress has been made but some obstacles still remain,” he clarified.

Korea will keep moving on and take steady steps toward the goal of establishing peace and co-prosperity of the two Koreas, which will lay the foundation for both countries’ eventual reunification, the ambassador asserted.

“We take our cues from the courage and conviction of the Egyptians as guarantor of peace and stability in this region. We will succeed, with the help and support of the friends from Egypt and the world,” the ambassador concluded.