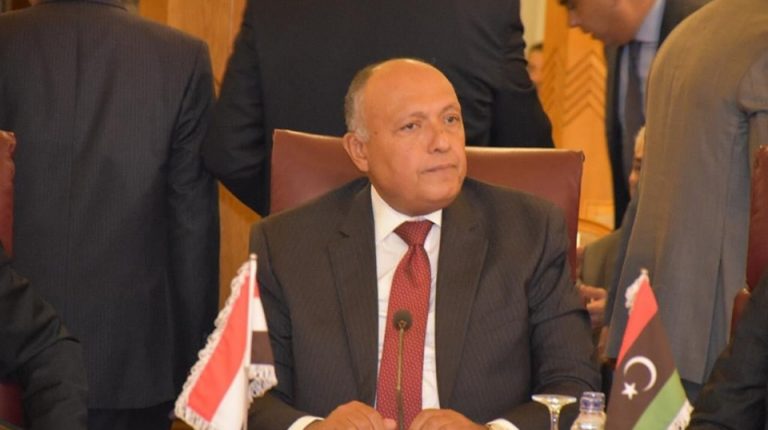 Egypt’s Minister of Foreign Affairs, Sameh Shoukry, accused Turkey of forcing a demographic change in North Syria through its current military operation, and that history will hold accountable those who are involved in this “occupation.” He stressed that the Turkish invasion is a blatant violation of the Syrian sovereignty, pointing out that the Turkish attack threatens all Arab countries and undermines the political solution in Syria.

Shoukry’s statement came during his meeting with foreign ministers of Iraq, Saudi Arabia, the United Arab Emirates, Bahrain, and Jordan to discuss the situation in Syria, held Saturday at the headquarters of the League of Arab States, also known as Arab League.

The Secretary-General of the League of Arab States, Ahmed Aboul Gheit, called on Turkey to immediately and completely cease all military operations in Syria and withdraw its forces that has penetrated the Syrian territory.

“In our emergency meeting today we should label the military operation carried out by Turkey in north-eastern Syria as an invasion of an Arab state and aggression against its sovereignty,” Aboul Gheit.

The statement of the meeting said that the ministers called on the UN Security Council to stop the Turkish aggression against Syria and discussed possible diplomatic and economic measures against Turkey. The Arab officials agreed that Turkey’s attack on Syria poses a threat to the security of the region, stressing on the need to hold Turkey responsible for any return of terrorist organisations.

Meanwhile, Qatar and Somalia on Saturday voiced reservations over the final statement of the Arab foreign ministers on Turkey’s military aggression in Syria.

Shoukry called on the international community to take all possible measures to stop this aggression, and force Turkey to withdraw immediately and unconditionally from the Syrian territories, hold accountable all those involved in the war crimes and displacement that are taking place there.

He asserted that Egypt supports all efforts aimed at countering this aggression. He also highlighted the increase of deaths and injuries in the war-torn Syria, saying that the number of displaced people reached 100,000.

The meeting of the Arab ministers came after an emergency summit between Shoukry and the Syrian Democratic Council, the political wing of the Syrian Democratic Forces. Members of the delegation posted Shoukry on the latest developments related to the situation on the ground amid the Turkish aggression against Syria, and also reviewed the overall event and challenges in this regard, their repercussions on the humanitarian situation, and large-scale waves of displacement.

Ahead of the meeting of Arab ministers, Shoukry received his Jordanian and Bahraini counterparts in separate meetings to discuss the developments in Syria and its impact on the sovereignty and territorial integrity of the country.