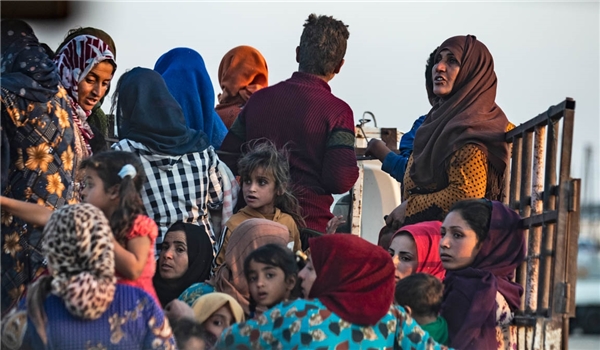 Turkey declared on Saturday that its forces have captured a key Syrian border town, as more than 200,000 people have fled their homes as the military offensive against Kurds enters its fourth day.

The Turkish Defence Ministry said that its forces seized control of Ras Al-Ayn’s residential centre in the east of the Euphrates River. However, an official from the Syrian Democratic Forces (SDF) refuted that Tukey captured the town, according to AFP.

On the other hand, Egypt’s Foreign Minister Sameh Shoukry met on Saturday with a delegation of the Syrian Democratic Council (SDC) and the political wing of the SDF to discuss recent updates on the Turkish offensive into northern Syria.

The delegation included Riyad Darar, head of SDC, and Ilham Ahmed, the co-chair of the executive committee of the council.

During the meeting, Shoukry reassured Egypt’s support to the unity of Syria and the safety of its people, condemning Turkey’s military “aggression” into northern Syria.

Since the Turkish military offensive began on Wednesday, more than 200,000 people fled their homes as civilians including women and children are taking shelter in schools and other buildings in Al-Hassakeh city and Tal Tamer, the United Nations said.

Turkey, which intends to create a “safe zone” for the return of millions of refugees to Syria, considers the Kurds as “terrorists.”

Turkey has managed to capture 11 border towns until Friday night, according to AFP and the Britain-based Syrian Observatory for Human Rights.

Dozens of civilians, including women, children, as well as Kurdish fighters were killed since the start of this offensive.

French minister for European affairs Amélie de Montchalin told France Inter radio channel on Friday that the EU sanctions against Turkey over its offensive into northern Syria “are on the table.” Earlier, European countries issued a joint statement calling for an immediate halt to the offensive.

The SDF, who already controls northern Syria, have helped in defeating the Islamic State (IS) in Syria as they are guarding prisons of captured IS fighters, many of them from foreign nationals as well as their families.

Last week, US President Donald Trump gave Turkey the green light to attack Kurds before pulling back US forces from north-eastern Syria.