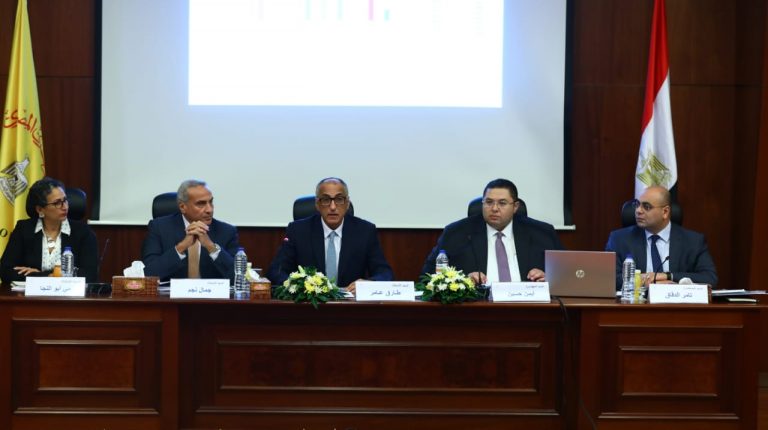 Egypt’s cabinet has recently approved the new banking draft law and referred it to the Legislative Committee of the State Council for review, before it was passed to the parliament for discussion and approval.

The cabinet approved the draft law, which includes 242 articles, in a session that witnessed the participation of Tarek Amer, the governor of the Central Bank of Egypt (CBE).

The cabinet said the preparation of this law came within the framework of modernising the legislative environment in the country, to keep up with the global changes witnessed in the banking arena and the accompanying developments in the field of banking services, payment systems, and financial technology, and increase the dependence of economic activities.

The cabinet also stated that the law contributes to supporting the national economy and promoting economic development, in light of the economic reform adopted by the state, through keeping up with the best practices and international norms, as well as legal systems of the corresponding regulatory authorities in the world.

The new draft law also contributes to raising the level of performance of the banking system, besides modernising, developing, and supporting its competitive abilities, all of which qualify it for both global competition and achieving the aspirations of the state towards the development and economic progress.

According to the cabinet, the draft law also aims to strengthen the governance and independence of the CBE to ensure the activation of its role and achieving its objectives, in light of the constitutional controls of independent body corporates and supervisory parties.

It also regulates the coordination and cooperation between the CBE, the government, and regulators of the financial sector, works on establishing the principles of governance, transparency, disclosure, equality, non-conflict of interest, fair competition, and the prevention of monopoly in the banking system.

The cabinet stated that during the preparation of the draft law, consultation with banks and concerned authorities, as well as a group of legal experts specialised in the field of financial and banking legislation were taken into consideration.

Moreover, the CBE governor said that the preparation of the new banking draft law was commissioned by President Abdel Fattah Al-Sisi, who highlighted the importance of enhancing monetary stability, banking, and the contribution to a greater role in supporting and achieving economic growth.

Amer pointed out that the draft law was discussed with all government bodies, ministries, banks, experts, and international bodies, noting they all appreciated and praised the step. It is a new stage of further development and reform in the banking system, he added.

The new banking draft law also focuses on the governance of banks, the CBE’s governance, strengthening the board of directors and executive departments, and the supervision of banks.

Amer highlighted that the CBE should enjoy full independence, which was taken into account in the new law, as it’s part of the national security of Egypt. Therefore, the supervisory role of banks was strengthened, especially that 89% of the society’s savings are in banks, he revealed.

Furthermore, the Deputy Governor of the CBE, Gamal Negm, said that according to the new draft law, 28 banks will not need to increase their capital to comply with the law, as their paid-up capital and reserves already exceed EGP 5bn.

Additionally, Ayman Hussein, the sub governor payment systems and information technology at the CBE, said the new draft law includes a full chapter on technological services and how to regulate their work. He added that it gives the CBE the authority to issue codified and digital coins. However, the decision has not been implemented yet.

He pointed out that the new draft law also regulates the work of companies operating in payment systems and services without a license from the CBE.

Tamer El Dakkak, legal advisor to the CBE, said that the CBE is keen to regulate the institutional relationship between the banking sector and the rest of the state.

He added that hedging financial crises has been addressed by the draft law, leaving room for an early intervention to prevent Egypt from going through any financial or banking crises.

El Dakkak pointed to specific articles in the draft law about digital currencies and the protection of the banking system’s customers in an interpreted and organised manner within a legislative framework, clarifying the rights of customers, and protecting the confidentiality of accounts and examination of complaints.

The membership criteria of the CBE’s board of directors have been further identified so as to prevent conflict of interest, El Dakkak said.

He noted that the draft law suggested creating a financial stability committee to be chaired by the prime minister with the membership of the CBE governor and the head of Financial Regulatory Authority (FRA), and shall meet every three months to avoid any banking crises.

El Dakkak pointed out that the draft law aims to protect the rights of customers of the banking system and monitors exchange companies, credit rating companies, inquiry companies, and payment service providers.

For his part, Mohamed Abdel Aal, a banking expert and board member of the Suez Canal Bank, said that nothing provides economic security for the citizen more than the ability of his banking system to achieve integration between the economic and social functions.

“But as the world evolved physically and technologically in all fields, the legislative environment needed to support and strengthen the banking system, its institutional structures, and providing laws to meet global challenges,” he added.

According to Abdel Aal, the new banking draft law added new elements, objectives, mechanisms, and means, ultimately aimed directly or indirectly at achieving the economic and banking security for the citizen.

He pointed out that there are eight important points that the new banking draft law has focused on, namely achieving the independence of the CBE administratively and technically, as the CBE’s governors are affiliated to the presidency of the country. In addition, the CBE’s capital increased to EGP 20bn, which gives confidence to the business community, investors, and depositors.

According to Abdel Aal, the second point is to increase the minimum capital to EGP 5bn for banks that have stakes owned by Egyptians, and $150m for branches of foreign banks, which improves the solvency of banks, and gives them more ability to grant credit and finance the process of economic development.

In accordance with the conduct of regulatory instructions, Abdel Aal added that the cancellation of the mechanism for determining the renewal periods for the banks’ CEOs gives more stability to their management.

The new draft law also includes the creation of central units in the CBE to protect customer rights, resolve disputes, and protect competition. It also includes an independent centre for crisis management and resolution, in addition to the establishment of a fund to develop the banking system.

Abdel Aal pointed out that the new banking law also allows the development of payment systems and services and financial technology, with the introduction of rules, policies and mechanisms to transform into a society less dependent on banknotes. Accordingly, this would make it easier for the citizen to meet his financial obligations, save time, effort and money. It would also reduce corruption rates, reduce inflation, and achieve financial inclusion, targeting marginalised and low-income groups, youth, and women in small and medium enterprises. It would also work to integrate the informal economy into the formal economy.

The law also includes rules for the use of financial technology, which increases job opportunities for the youth, besides regulating the CBE’s relationship with the government, reorganizing the coordination between fiscal and monetary policy, and creating a committee to monitor financial stability.

Commenting on the new banking law, Egyptian investment bank Prime Holding said that the law will have a negative impact on small banks, especially those with low equity rates.

Prime Holding said that the CBE denied the exclusion of reconstruction and housing banks and export development banks from being subject to the minimum capital increase as banks provide integrated banking and financial services.

He explained that there are some banks that are compliant with the law of banks in terms of capital, such as Commercial International Bank (CIB) and QNB Alahli, and therefore will not need to increase capital.

He pointed out that the law will have a negative impact on Al Baraka Bank as it needs to raise its capital base by about EGP 1.4bn, as well as the ADIB and the EG Bank.

Prime Holding predicted that small banks that are unable to increase their capital will see mergers and acquisitions in the next three years, which is the period set by the CBE to comply with the law.

He noted that banks, with support from “parent” banks, are expected to suffer less than the rest of the banks in terms of capital increases.

In another regard, Prime Holding expected that the profits of banks will see a limited effect by the new banking law to allocate 1% of their net profits for the banking sector support fund.