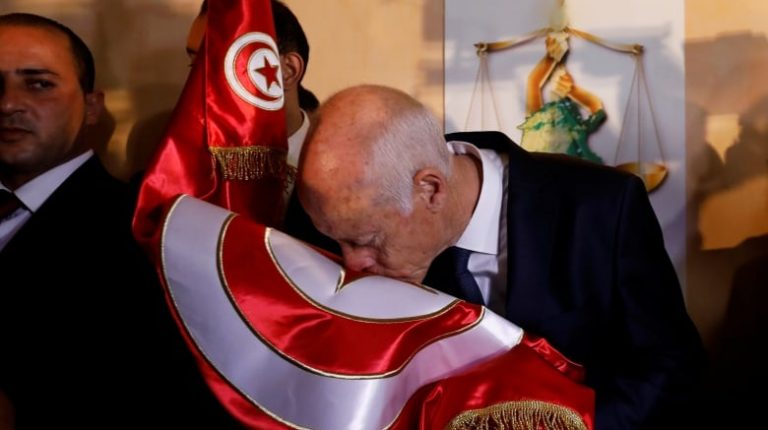 Exit polls from market research companies Sigma Conseil and Emrhod Consulting predicted on Sunday that Saied took nearly 77% and 72% of the votes. Meanwhile, Nabil Karoui is projected to receive 23% and 27%.

Karoui was released last week from prison but still faces charges of money laundering and tax evasion which he denies. Karoui insisted that he will wait for the official results, which will not be published until Monday.

Tunisians took to the streets and to the grand boulevards of central Tunis to celebrate the victory of Saied.

“The era of guardianship has ended. Our project, today, is based on freedom,” Saied said in a televised victory speech following the results.

Saied said that Tunisia has taught the world a new lesson, describing the election as a “new revolution” but within the framework of the constitution and legitimacy.

Saied pledged to build a new Tunisia, the one which the people chanted for and called for in December 2010, during the Jasmine revolution.

Saied also thanked Tunisians who cast their ballots and even those who did not since they are free to make their choices. He thanked, in particular, the young people who voted in favour of him.

If official results confirm his wining, Saied will face the country’s significant economic and security challenges, including an unemployment rate reaching 15.30% in 2019.

The overall turnout in the presidential runoff at home stands at 57.8%, according to the Independent High Authority for Elections. It is significantly higher than the 45% participation in the first round, but also less than 2014’s presidential election, which was 63%.

In the first round of presidential polls, Saied received 18.40% of the votes and Karoui took 15.58%.

On the other hand, the Ennahda Movement Party took 52 seats in the Assembly of People’s Representatives, while Qalb Tounes Party (The Heart of Tunisia), the party of Karoui took 38 seats.

According to the 2014 Tunisian Constitution, the chosen president and parliamentary government share executive powers, while the president has authority on foreign and defense policy.