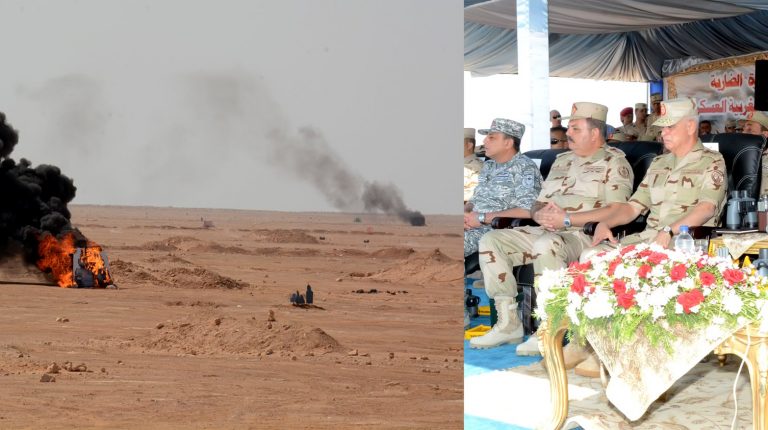 The exercises are being carried out in the northern fleet region in the Mediterranean. The drills came at the same time of the arrival of the French multi-mission frigate Auvergne to Alexandria Port and with the participation of the Egyptian frigate Tahya Misr, the statement added.

The drills aim at enhancing military cooperation between Egypt and France, exchanging expertise over the latest methods of fighting as well as supporting maintaining maritime security and stability in the region.

Ealier on Tuesday, Egypt’s Minister of Defence and the Commander-in-Chief of the Armed Forces Mohamed Zaki, attended the main phase of the “Ra’d 31” military manoeuvres, stressing the armed forces’ ability to secure Egypt’s borders and defend its national security.

He stated that the armed forces have a developed arming system in all categories, in addition to professional fighters.

The manoeuvres were conducted by the Western Military Zone in cooperation with the main branches of the armed forces. Live ammunition was used in shooting during the training which has lasted for days.

This came as part of the tactical fighting plan for both forces, in conjunction with the celebrations for the 46th anniversary of the October victories.

In his speech during the first stage of manoeuvres, the commander of the Western Military Zone pointed out the keenness of the General Command of the Armed Forces on supporting the zone and providing it with the latest weapons and equipment to keep the forces efficient for protecting Egypt’s western borders.

His speech was followed by a summary of the tactical idea of ​​the manoeuvring phases, a summary of previous actions, and the decision taken to achieve the assigned tasks. Another part of the training was combating operations with the support of air force.

Zaki also delivered greetings from President Abdel Fattah Al-Sisi to the participants of the manoeuvres in his speech. He also tackled the method of controlling the battle formation, providing assistance in the implementation of tasks, and how to take the appropriate decision to face the sudden changes during the course of hostilities.