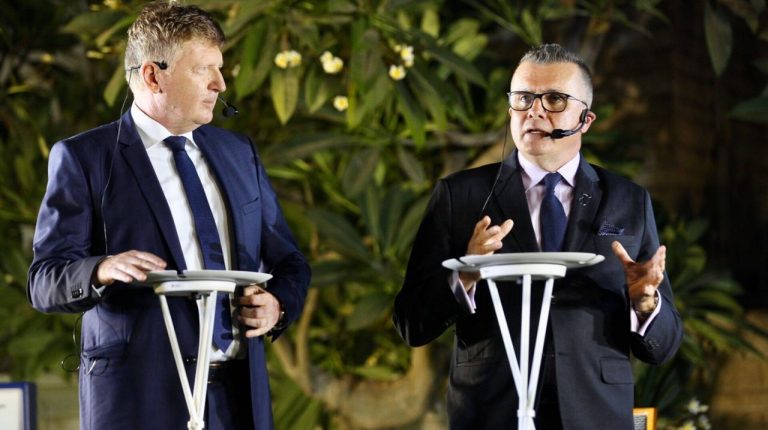 The European Union (EU) delegation to Egypt is expected to fund new programmes with about €125m in 2020, ambassador Ivan Surkoš, head of the EU delegation told Daily News Egypt.

“This amount of finance will be through the Single Support Framework (SSF),” he added.

This came on the sidelines of the event that was hosted by the Swedish embassy in conjunction with the EU delegation to launch the EU Gender Champion initiative on Monday evening,  in the presence of the Minister of Planning, Monitoring and Administrative Reform Hala El-Saeed, the Minister of Tourism Rania Al Mashat, the Head of the National Council for Women (NCW) Maya Morsy, and other public figures and stakeholders.

The EU doesn’t impose its programmes, yet it negotiates with the Egyptian side to agree on priorities for the coming year, Surkoš asserted, noting that the SSF will continue to allocate about €500m to Egypt until 2020.

“We also have several regional programmes that Egypt can benefit from. We have trans-boarders cooperation programmes including Italy and Egypt in addition to other programmes supporting scientists, academia, and students,” he stated.

The EU pays great importance to supporting the stability of the social economic development in Egypt, openness of the society, and the inclusion of civil society organisations to face the challenges of the country, the ambassador noted, assuring that women can play a key role in boosting the economy.

Additionally, Surkoš said that the EU Gender Champion initiative is being financed through the resources of the EU delegation and the embassy of Sweden. “This initiative isn’t a new programme that needs major funding. It’s an activity of the EU ambassadors in Egypt to highlight the role of women,” he added.

The EU is also preparing new programmes to support women’s role in the Egyptian society, the ambassador said, noting that 2020 will witness the announcement of a new programme to support elimination of female genital mutilation (FGM) , in close cooperation with the NCW and the United Nations (UN)UN.

The ambassador asserted that tThe EU and its mMember sStates are committed to promotinge women’s and girls’ rights around the globe, the ambassador asserted. , noting, “Tthe EU Gender Champion initiative has been launched globally to support this commitment. Egypt is part and parcel of a global family of countries, where gender issues matter,.” he noted.

Ambassador Surkoš expressed his firm belief that the world will be better off when women and girls are fully and equally represented and engaged in all fields, without discrimination.

“Sweden supports Egypt’s active endeavors towards gender parity. Sweden is the first country to adopt a Feminist Foreign Policy, leaving no one behind. Sweden and the EU work closely with Egyptian partners, supporting and highlighting initiatives and cooperating in their implementation,” said Jan Thesleff, Swedish ambassador to Egypt.

Gender equality is not only a priority, but unavoidable for progress and growth, mentioned Thesleff, noting that it is enshrined in the fifth sSustainable dDevelopment gGoal (SDG) no.5 and is moreover a prerequisite for all the other SDGs.

Moreover, EU cooperation targeting areas of women empowerment and violence against women and girls in Egypt, has accounted for more than €20m since 2014, while more than €150m has been targeted to child protection and access to education, with significant part of this being dedicationed to girls’ rights.

Sweden’s work in the region to promote female participation in the economy is extensive and includes both educational training, financial aid, and other programmes. The Swedish international development cooperation agency (Sida) supports, in partnership with Egyptian ministries and authorities, UN agencies and civil society actors, an integrated programme on social, economic, and legal empowerment of Egyptian women.

The objective is to strengthen women’s empowerment, as well as increase the participation of women in politics, business, and society.