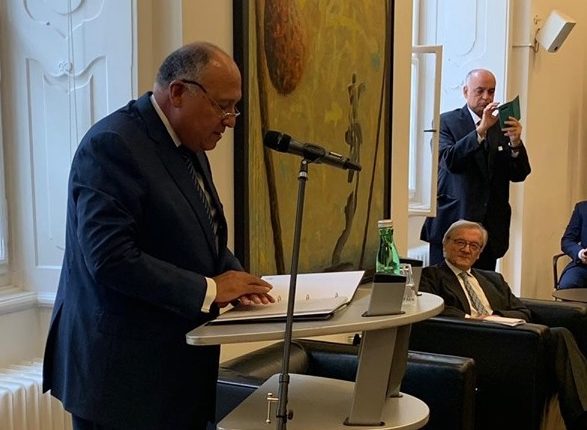 The international community has to ensure the success of the current negotiations between Egypt, Sudan, and Ethiopia regarding the Grand Ethiopian Renaissance Dam (GERD) to reach a fair agreement on the filling and operating the dam, Egypt’s Foreign Minister Sameh Shoukry said on Monday.

Shoukry’s remarks came during his lecture on Egypt’s foreign policy at the Foreign Policy and United Nations Association of Austria (UNA-Austria).

Earlier this month, Cairo announced that the current round of negotiations between Egypt and Ethiopia regarding the dam have stalled.

Egypt President Abdel Fattah Al-Sisi revealed on Sunday that he will meet with Ethiopian Prime Minister Abiy Ahmed in Russia to discuss the issue of the GERD, without specifying the date of the meeting.

Following the deadlock in talks, Egypt called for the involvement of international mediation in the GERD negotiations to help in reaching a fair agreement between Egypt, Sudan, and Ethiopia.

In his speech, Shoukry also reviewed the main challenges in the Middle East, asserting that Egypt supports the aspirations of the peoples of the Middle East and their rights in security and stability, according to the ministry’s Monday statement.

Moreover, Shoukry renewed Egypt’s rejection of Turkey’s military offensive into north-eastern Syria, emphasising the rights of Syrians to protect themselves against “this blatant aggression.”

Shoukry also asserted the need to reach a political solution to end the Libyan crisis and settle the Palestinian Cause through establishing an independent state with East Jerusalem as its capital, to achieve the legitimate rights of Palestinians.