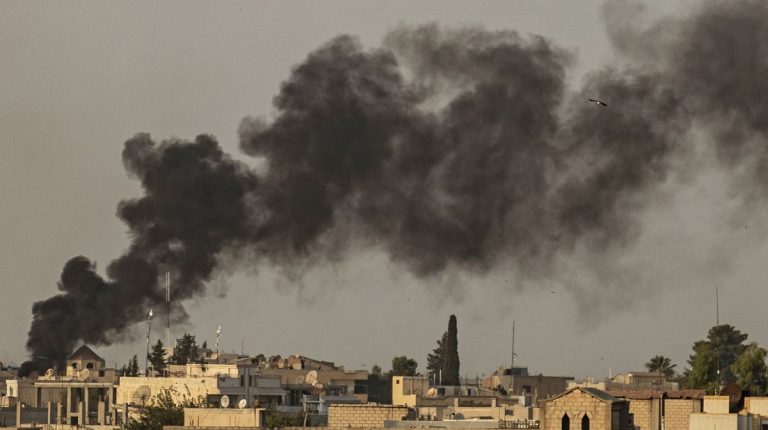 US President Donald Trump has ordered to immediately halt the trade negotiation with Turkey and to impose sanctions on former and current officials of the Turkish government over its incursion into north-eastern Syria.

Trump also phoned Turkish President Recep Tayyip Erdoğan and asked him for an immediate ceasefire according to Vice-President Mike Pence.

In a lengthy statement posted on Twitter, Trump said that his executive order will enable the US to “impose powerful additional sanctions on those who may be involved in serious human rights abuses, obstructing a ceasefire, preventing displaced persons from returning home, forcibly repatriating refugees, or threatening the peace, security, or stability in Syria.”

Trump also ordered to increase the tariffs on Turkish steel up to 50%.

The US President said that the US will “aggressively use economic sanctions to target those who enable, facilitate, and finance these heinous acts in Syria.”

Trump’s order followed his decree to withdraw US troops from Syria’s northern border with Turkey, clearing the way for Turkey to launch its military offensive on US-allied Kurdish forces.

Turkey’s incursion came after a phone call between Trump and Erdoğan last week. The White House said that Turkey would move forward with its “long-planned operations into northern Syria.”

Trump’s move to pullback US troops from north-eastern Syria has drawn intensive criticism inside and outside.

The US President kept complaining that the US repeatedly asked European countries to take back the Islamic State (ISIS) prisoners that belong to them, but they rejected.

“I offered ISIS prisoners to the European countries from where they came and was rejected on numerous occasions. They probably figured that the US would bear the tremendous cost as always,” Trump tweeted on Monday.

More than 12 thousand ISIS fighters from Syrian, Iraq, and many foreign nationals have been held in northern Syria and guarded by Kurdish led Syrian Democratic Forces (SDF), in addition to ISIS affiliated families of women and children who have been held in outlawed detentions.

The Kurdish fighters have been key allies for the US in its fight against the ISIS.

Under a deal between the Kurdish fighters and Syrian government forces reached on Sunday, Syrian President Bashar Al-Assad’s troops have entered several key towns across north-eastern Syria including Tabqa, the outskirts of Raqqa, the town of Manbij, and Ain Issa, according to Syrian state media. Kurds said that they made the deal to fend off the Turkish invasion.

Since Turkey began its incursion into northern Syria last week, dozens of Kurdish fighters and civilians, including women and children, were killed, while at least 160,000 have been displaced according to the UN.

Turkey’s military offensive aims to push the SDF from the border region and to establish a “safe zone” for the return of Syrian refugees.

Clashes continue between Kurdish fighters and Turkish troops as Turkey entered the outskirts of Ras Al-Ain.

More than 700 ISIS-affiliated relatives escaped during the last few days according to Kurdish officials who accused Turkey of bombarding prisons that hold ISIS fighters.

The Human Rights Watch warned European countries on Tuesday about the transfer of ISIS fighters from prisons in north-eastern Syria to Iraq, amid reports of some countries seeking to move them across borders.