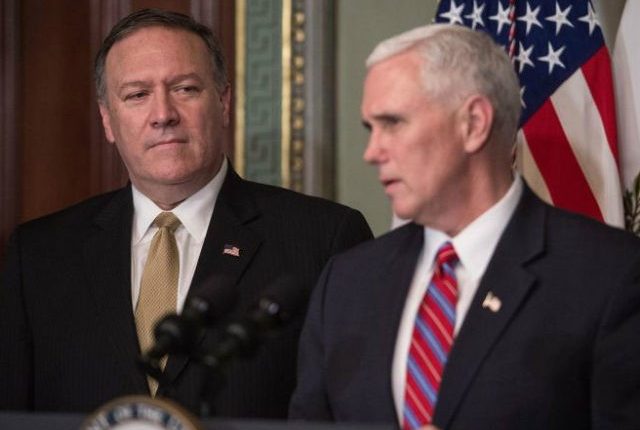 “At President Donald Trump’s direction, tomorrow I will lead a delegation to call on Turkey to stop the invasion, enact an immediate ceasefire, and begin negotiations to restore peace and stability to the region,” Mike Pence said via Twitter on Tuesday.

In Ankara, Pence is expected to meet with Turkish President Recep Tayyip Erdoğan on Thursday.

The move came after Trump asked Erdoğan for an immediate truce in north-eastern Syria before Erdoğan slapped down the US President’s calls.

On Wednesday, Erdogan said that he would decide whether to go ahead with a scheduled visit next month to the US after meetings with an American delegation in Turkey this week.

Erdoğan announced on Tuesday that he will never declare a ceasefire in north-eastern Syria or start negotiations with US allied-Turkish forces, describing them as “terrorists.”

Moreover, Erdoğan expressed no concerns over the advancement of Syrian government troops in Kurdish-led towns in the north.

The remarks of the Turkish President also followed Trump’s order to sanction Turkey’s Defence, Energy, and Interior ministers over their involvement in the invasion into north-eastern Syria.

The US President said on Monday that the US will “aggressively use economic sanctions to target those who enable, facilitate, and finance these heinous acts in Syria.”

Meanwhile, the US Congress also will push for a package of sanctions against Ankara including cutting military support to Turkey.

A week ago, Turkey began a massive military offensive against Kurdish led Syrian Democratic Forces (SDF) in north-eastern Syria, following Trump’s decree to pullback US troops from there.

According to the SDF, dozens of Kurdish fighters and civilians, including women and children, were killed, while hundreds were wounded since the incursion began. More than 275,000 people have been displaced from their homes and towns, according to Kurdish administration.

The Russian-backed Syrian government troops entered on Monday several towns which are controlled by Kurdish fighters in the north including the key city of Manbij, under a deal reached on Sunday between the two parts to fend off the Turkish offensive.

UN warns of ‘imminent danger’ of escalation in Syria