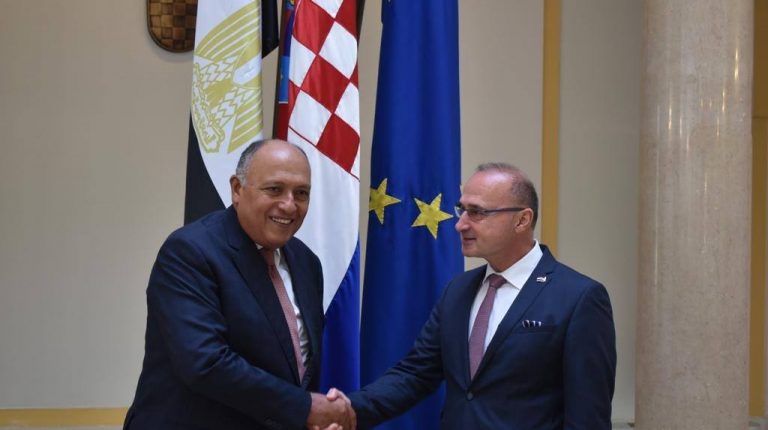 Egypt’s Foreign Minister Sameh Shoukry and his Croatian counterpart Gordan Grlić Radman discussed means to enhance their countries’ various cooperation frameworks on both the political and economic fronts, on Tuesday.

During the meeting, Shoukry and Radman agreed on the importance of continuing consultations on the main bilateral, regional, and international issues of common concern.

The two officials focused on boosting cooperation in the fields of natural gas and maritime transport, in addition to seeking to increase their trade exchange rates to be in line with their distinguished political relations.

Shoukry also briefed Radman on the level of progress achieved in the Egyptian economy, following the implementation of the economic reform program. He also referred to its promising investment opportunities that Egypt provides.

Shoukry expressed his aspiration that his visit to Zagreb would yield a significant breakthrough in bilateral relations, which have been witnessing growing momentum in recent years.

At the beginning of the meeting, Shoukry conveyed greetings of President Abdel Fattah Al-Sisi to the Croatian President, inviting her to visit Egypt soon.

According to a statement by the ministry, Shoukry congratulated Kitarović on her country’s upcoming presidency of the European Union in the first half of 2020.

During the meeting, Shoukry expressed Egypt’s keenness to cooperate with Croatia during its upcoming EU presidency in all fields.

Both officials discussed cooperation in the tourism, technology, renewable energy, and food industries, as well as the possibility of signing agreements between the Egyptian and Croatian ports.

Shoukry reviewed also Egyptian vision on ways of facing the joint challenges as well as the Egyptian stances towards regional issues, topped by the Syrian crisis and the Turkish aggression in Syria.

Shoukry asserted the importance of working to develop economic relations with Croatia and discussed cooperation in the tourism field.

He also expressed hope that the Egyptian-Croatian committee would be held in 2020. A committee that the two countries signed a protocol to establish for economic cooperation in 1995.

Plenković praised the level of relations and coordination with Egypt and was keen to get acquainted with Egypt’s stance on the regional developments and various challenges facing the region, mainly the situation in Syria, according to the ministerial statement.

Shoukry started his tour to Eastern Europe on 13 October to Vienna, Austria, Croatia, Lithuania, and Latvia to enhance ties.