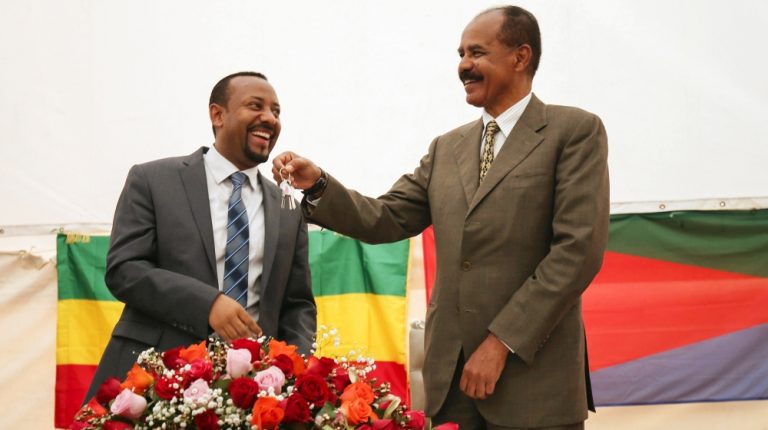 The Ethiopian leader was honoured for ending years of hostility and border conflict between the two countries. He was among more than 300 candidates, including individuals and institutions, who competed for the award this year.

Many found Ahmed’s winning of the Nobel Prize surprising and wondered why it was not awarded to the Eritrean President Isaias Afwerki, being Ahmed’s partner in the peace talks.

Washington Post quoted foreign analysts on the situation between two countries, saying that despite the 2018 agreement between Eritrea and Ethiopia to end the conflict between the two nations, the agreement remains largely unimplemented, and there have been a few visible benefits for the Eritreans.

The prize is worth KR 9m (about $0.9m). The award ceremony will take place in the Norwegian capital Oslo on 10 December and he is scheduled to give a speech ahead of receiving the prize.

The Nobel Committee said that it awarded the prize to Ahmed for “his decisive initiative to resolve the border dispute with neighbouring Eritrea.”

The prize appreciates the efforts of “all parties working for peace in Ethiopia, East and North-East Africa,” the committee said.

Ahmed commented on his victory saying, “I am so humbled and thrilled. Thank you very much. It is a prize given to Africa, given to Ethiopia. I can imagine how the rest of Africa’s leaders will take it positively to work on peace building process in our continent.”

Meanwhile, Ahmed’s office said, “The award is a proof of the values of unity, cooperation, and coexistence that the prime minister has consistently promoted.” 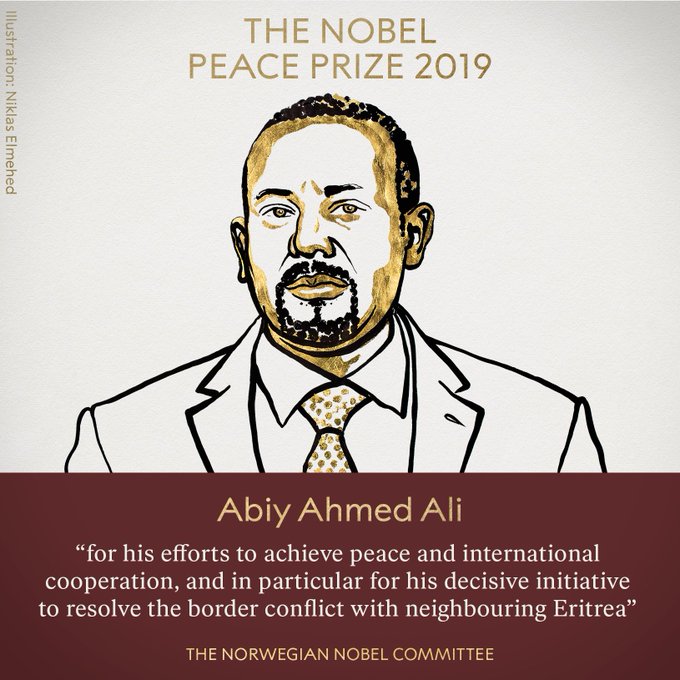 Ethiopia and Eritrea restored relations in July 2018 after years of hostility and after a 1998-2000 border war. Ahmed headed to the Eritrean capital of Asmara in July in his first historic visit.

In another unprecedented scene, thousands of Eritreans took to the streets to welcome Ahmed, holding flags of Eritrea and Ethiopia. Asmara was also decorated with flags of both countries celebrating the special occasion.

On 9 July 2018, Ethiopia and Eritrea officially signed the Declaration of Reconciliation and Friendship, upon which embassies of the two countries were opened, ports and flights resumed, in tangible signs of a rapprochement that ended a two-decade feud.

The declaration ended one of Africa’s long-running military confrontations, which destabilised the region and forced the two governments to pour large sums of money from their budgets to spend on security and armed forces.

“After the discussion, we agreed to reopen our embassies,” Ahmed said in remarks broadcasted on state televisions of both countries.

Moreover, Eritrea’s President Afwerki visited the Ethiopian capital Addis Ababa twice after the agreement. In his second official visit on 14 October 2018, the two sides ended their differences and agreed on launching economic cooperation.

During the visit, Afewerki and Ahmed discussed boosting bilateral economic and trade cooperation.

However, some people were sceptical, Laetitia Bader, a researcher at Human Rights Watch told WP “I think there was a lot of hope in Eritrea, but very quickly, Eritreans saw that things were not changing on the ground.”

Also,  Vanessa Tsehaye, an Eritrean activist based in London was quoted saying that he believes that recompilation did not have a positive impact on Eritrea people, as conditions are the same as it was before the deal.

Similarly, Eritrean Human Rights activist Selam Kidane commented on the victory of Ahmed saying in a tweet “ I didn’t know one could win a peace award without achieving peace,” about the current situation between both countries after the deal.

Despite the deal, open borders were short-lived, as Eritrea has immediately closed the border again.

Some believe that Ahmed succeeded to make 2018 an unprecedented year for Ethiopian women, as many reached senior executive and legislative positions.

In February 2018, the Ethiopian diplomat Samia Zakaria assumed the presidency of the national election council, for the first time in the country’s history. Moreover, Sahle-Work Zewde is the current President of Ethiopia and the first woman to hold the office. She was elected president unanimously by members of the Federal Parliamentary Assembly on 25 October 2018. The position is largely a ceremonial one, with executive power vested in the prime minister.

Also, Muferiat Kamil was elected as the first female parliament speaker in the country, succeeding Abba Dola. She is currently the Minister of Peace and the Chairperson of the Southern Ethiopian People’s Democratic Movement (SEPDM), one of the four parties that make up the ruling coalition in the country, the Ethiopian People’s Revolutionary Democratic Front (EPRDF).

The chairmanship of the House of Federation – the upper house of the Ethiopian parliament – was assigned to Keria Ibrahim. Moreover, 10 out of 20 seats in the Ethiopian government were assumed by women, including Aisha Mohammed Mussa who was the country’s Defence Minister from October 2018 until 18 April 2019.

Several Sudanese political parties welcomed Ahmed’s Nobel Prize winning, and considered it a source of pride for the Sudanese revolution – which started on 19 December 2018 – and an affirmation of the global momentum gained as it was one of the most important milestones of peace efforts led by Ahmed at the local and regional levels.

Many Sudanese political leaders highlighted Ahmed’s participation in the negotiation between Sudan’s Forces of Freedom and Change, and the Transitional Military Council, which helped in completing its path after it was halted for time. They said Ahmed was realistic and showed logical and great tendency towards peaceful solutions.

Despite all recognised achievements made by Ahmed in Ethiopia, he seems not cooperating very well with Egypt to settle the dispute over the Grand Ethiopian Renaissance Dam (GERD) which started in 2015. Ethiopia seeks to complete the construction of the dam, while Egypt is concerned that it will affect its share of Nile River.

Writer Adly Sadek said in an op-ed at The Arab newspaper, based in London, “All these successes of Ahmed do not mean that the man has solved all his country’s problems completely, but he still has the GERD dispute.”

The writer believes that Ahmed managed to encourage his people to “support his national projects, especially the GERD. However, he has not shown any sign to make a compromise with Egypt as it objected some technical aspects of the project.

Now it is a test for him, as he must find a suitable way out of this issue which is a major contributor to peace and development in the region, Sadek said

In March last year, Ahmed was chosen to be Ethiopia’s first Muslim prime minister. He is also the first Ethiopian prime minister from the country’s largest ethnic group, the Oromo, which makes up one-third of the population in a country suffering ethnic conflict among its 90 constituent groups.

Ahmed’s first speech in the parliament was a declaration of a new era in Ethiopia’s history, in which he announced a roadmap for long-awaited reforms, launching political freedom, fighting corruption, and developing the economy. Ahmed has fought all symbols of corruption, including leaders of the Ethiopian army.

He previously joined the Oromo Democratic Party, which fought against the Marxist Mengistu Haile Mariam’s regime.

Many encouraged his election to be Ethiopia’s leader for his mixed religious background, as his father is Muslim and his mother is Christian.

After taking the office, Ahmed incorporated several reforms and expanded freedoms in his country, which had been limits in many areas. Dozens of detainees were released, and others returned from exile.

Ahmed received his PhD on local conflict resolution in the country from the Institute for Peace and Security Studies in Addis Ababa last October. According to the party members, Ahmed is an excellent speaker, preferring to make decisions based on arguments.

He has a military and intelligence background, as he established a network and information security agency that sought to monitor ordinary Ethiopians, including dissidents in Europe and North America.

Between 2008 and 2010, Ahmed oversaw the expansion of radio and television broadcast at a time when Ethiopia was known for its lack of press freedom. He served as Minister of Science and Technology in 2015.

Once in power, he focused on the country’s ethnic conflicts which displaced 2.5 million Ethiopians. Ahmed also solved some outstanding issues with neighbour countries, mainly the Oromo-Somali clashes.