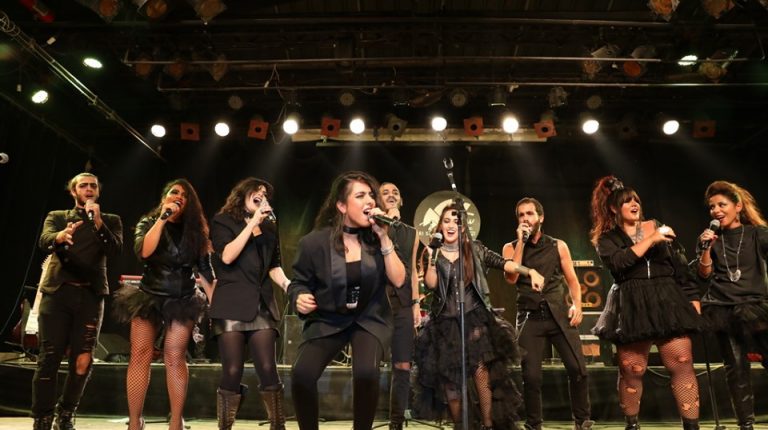 The legacy of Queen’s everlasting songs still sheds its light on younger performers whom, decades after the original releases, still get inspired by the heart-touching rhythms and the moving lyrics. The Egyptian performing musical theatre company, Fabrica, won the Best Music Video Award at the 9th annual MoziMotion-iPhone Film Festival in the Netherlands, for their performance of Mercury Rising: A Queen Tribute, a reduplicated medley of the band’s most famous songs.

In a video, the troupe captured its spectacular performance of the prominent band’s most famous songs. As the camera follows members of Fabrica backstage, each comes out singing parts of Queen’s songs, each adding a new vocal layer.

The video saw the light last January, a few months after the release of the award-winning Bohemian Rhapsody hit theatres causing a buzz from the performance of Egyptian actor Ramy Malek as Freddie Mercury. This starring role got him the Academy Award for best acting.

The seven-minute, one-shot video is directed by Mohamed Koushi, with art direction and choreography by Omar Warda.

“What captured everybody’s attention was – and it shows that they’re theatre actors – the first, I would say, 90% of the first, is a continuous camera roll, it’s all one take. You go all the way to the end and if you mess up, you’ve got to start all over again,” said MoziMotion co-founder, Ruben Kazantsev.

The fact that Fabrica members are also theatre actors helped raise the ranks of the video. According to the jury, the single-shot showcased them actually acting, not just performing the songs emotionally.

“The acting is brilliant. Wardrobe change is brilliant,” Kazantsev added. “It’s a no-brainer that this takes the first place.”

“When I first saw that it lasts for seven minutes, I didn’t think I could last until the end; but it captures you at every minute,” Kazantsev pointed out.

The medley’s arrangement was made by Mohab Kaddah, with music production, recording and piano by Mina Samy, and mixing and mastering by Ali Farouk at Blue Mango Studios. Co-Founder and CEO of Fabrica Neveen Allouba produced the video and was responsible for the musical supervision.

The 30 members of the troupe took part in the video performing almost all the hit songs of the band.

The video captured the hearts of the jury, due to the number of songs they managed to perform in a single shot.

The team was showered with praise, also for the fact that they come from Egypt, to be the first reviving Queen’s music videos, just like the band was the first to shoot a music video.

The medley was shot at Al-Falaki Theatre in downtown Cairo, at the stage of the American University in Cairo’s old campus.

Fabrica entered the scene in 2013, under the support and supervision of Soprano singer, Neveen Allouba. The band is known to localise international shows, including the Egyptian translation of the Musical “Les Misérables,” Brecht’s “Threepenny Opera,” as well as adapting local shows such as El-Leila El-Kebira (The Big Night) by Salah Jahin and Sayed Mekawy to the stage.