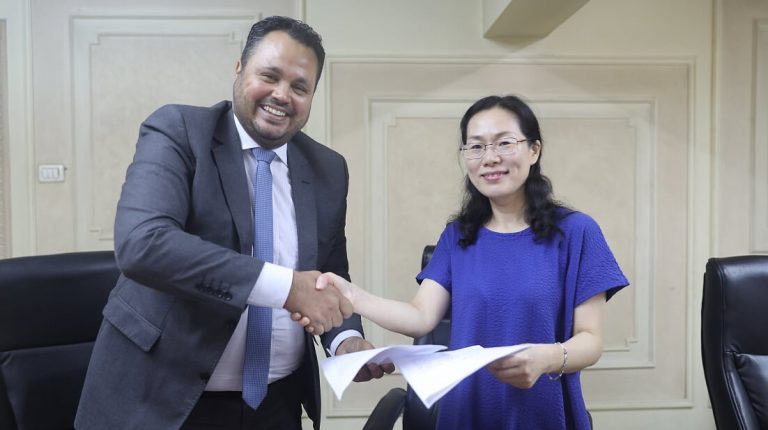 Within the framework of the distinguished and strategic relations between the Arab Republic of Egypt and the People’s Republic of China, Daily News Egypt signed an agreement with Xinhua, the Chinese news agency, to benefit from its news and photo services, aiming to enhance media and press exchange between the two institutions.

The agreement was signed by, Chairperson and Editor-in-Chief of the Daily News Egypt Saad Zaghloul, and, Deputy Director-General of the Regional Bureau of Xinhua in the Middle East Wu Zhongmin. The newspaper will share the agency’s content, photos, and videos in English.

Zaghloul, said the partnership with Xinhua was part of the newspaper’s push to expand its coverage to more global issues, based on the agency’s editorial material and images, to provide high-quality services for readers in Egypt and all over the world.

“The agreement will be the beginning of an extended relationship, and Daily News Egypt is looking forward to a strategic partnership with Xinhua beyond the use of content and images to exchange services and press and cultural products,” he added.

Under the agreement, Daily News Egypt will have the resources to strengthen its coverage of global issues, adding to its coverage of local affairs as an Egyptian voice for the world.

She added that this cooperation with the Daily News Egypt, which enjoys a strong presence among Egyptian and foreign elites in Egypt, is just the beginning of fruitful cooperation on all the services provided by the agency in Egypt and the Middle East.

The first issue of Daily News Egypt was published in May 2005. It is the only independent English daily newspaper in Egypt. It is also one of two English daily newspapers in Egypt and ranks first in terms of spread, distribution, and impact, through its print and interactive websites, as well as social media outlets working 24 hours a day.

Founded on 7 November 1931, Xinhua News Agency, is the only national news agency in China. It is also an international news agency in various areas and fields, with 35 offices across China, seven regional offices, and more than 170 offices around the world, staffed by thousands of Chinese and local reporters working on 24-hour news coverage.