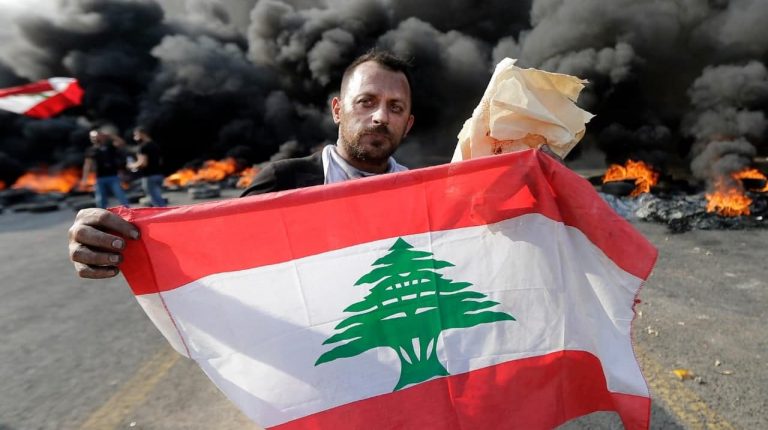 Lebanon’s armed forces declared on Saturday that it supports the legitimate rights of tens of thousands of protestors who have swept the streets calling for the government to step down.

In a statement, the army urged demonstrators to express their demands related to their livelihood and dignity in peaceful ways and to avoid vandalising.

Meanwhile, Lebanese Interior Minister Raya Al Hassan said via Twitter that protesters who were arrested on Friday will be released.

In the same context, Lebanon’s Hezbollah leader Sayyed Hassan Nasrallah said on Saturday that the movement does not support the calls for Prime Minister Saad Al-Hariri to resign.

In a televised speech, Nasrallah expressed his understanding of the mass protests that have swept the country since Thursday, but said that the government of Al-Hariri should take the responsibility to tackle the crisis but with a “new methodology and spirit.”

Nasrallah said that the problem is not with the government but with its methodology. “It is not known that if the current government resigns the upcoming one could be formed in a year or two years.”

Moreover, Nasrallah said that the nationwide protests sent a significant message to politicians, that the people can no longer afford any new taxes and will take to the streets to protest against these policies.

Nasrallah said that when the government impose new taxes on the poor, then it is expected that they will demonstrate.

Nasrallah called all government officials to cooperate and to not to escape from responsibility.

Since Thursday, tens of thousands of protesters took to the streets of the capital Beirut and other cities including Sidon and Tripoli, calling the government of Prime Minister Saad Al-Hariri, President Michel Aoun, and Parliament Speaker Nabih Berri to step down.

The furious protests, the largest since 2015, were sparked following a governmental decree to tax voice calls made through the Facebook-owned software WhatsApp and erupted against the country’s weak economic conditions. The government immediately withdrew its decision.

In a televised speech on Friday, Al-Hariri blamed his political partners for blocking a series of reforms that would tackle the current economic crisis.

Al-Hariri gave himself and his political partners 72 hours to provide satisfactory solutions for both the Lebanese protesters and international partners.

Lebanon is among the most indebted countries in the world, with the public debt-to-GDP ratio is 150%, according to the International Monetary Fund and Trading Economics.