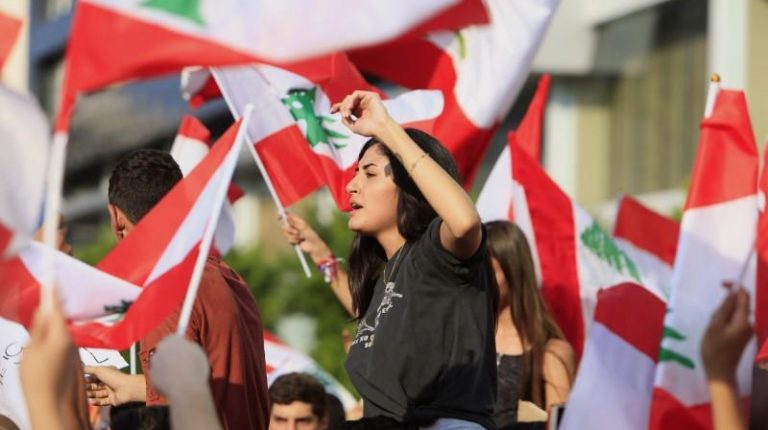 Tens of thousands of Lebanese people continued on Sunday their anti-regime protests for the fourth day in a row, demanding the toppling of the regime and the resignation of all government officials.

Protesters intensively swept to Abd Al–Hamid Karami plaza, Tripoli, where a sit-in entered its third day, according to the Lebanese National News Agency. Demonstrators raised Lebanese flags and chanted “Revolution”, the agency reported, adding that the number of protesters has been increasing in Riad al Solh Square, Beirut.

The nationwide protests and sit-in have continued in Beirut, Tripoli, Sidon, and other cities across the country.

Earlier on Tuesday, the head of the Maronite Christian Lebanese Forces party Samir Geagea announced that his party’s four ministers resigned from the government.

In a press conference, Geagea said that his party concluded that the government is not able to tackle the current crisis, calling for the formation of a new government.

“The (current) government is unable to take steps required to resolve the worsening economic and financial situation,” Geagea said.

Demonstrators celebrated the move on Tuesday, calling for the rest to resign too.

The nationwide protests erupted on Thursday against the government’s decree to tax voice calls made through the Facebook-owned WhatsApp software and erupted against the country’s economic conditions, and corruption. The government immediately withdrew its decision.

The Lebanese armed forces declared on Tuesday their support to the legitimate rights of protesters, calling them to express their demands peacefully.

In a speech on Friday, Al-Hariri gave his political partners 72 hours to provide satisfactory solutions for both Lebanese protesters and international partners.

Lebanon is among the most indebted countries in the world, with the public debt-to-GDP ratio at 150%, according to the International Monetary Fund and Trading Economics.