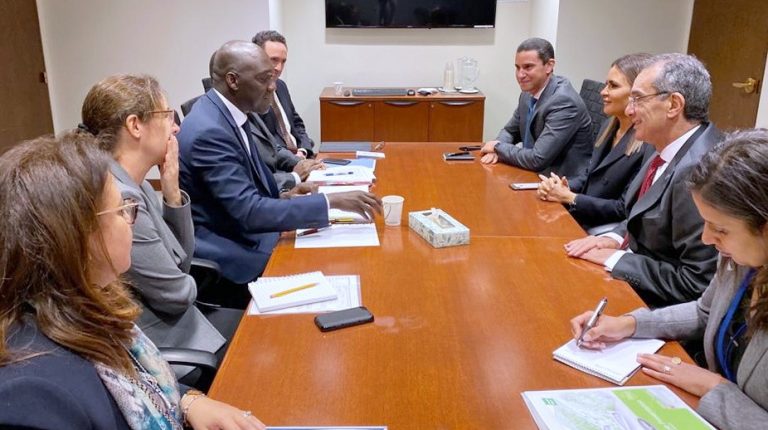 Minister of Investment and International Cooperation (MIIC) Sahar Nasr, along with the Minister of Communications and Information Technology Amr Talaat met with the World Bank’s (WB) Vice President for Infrastructure Makhtar Diop,  on the sidelines of the WB and International Monetary Fund (IMF) 2019 annual meetings where they agreed on boosting infrastructure and digital cooperation.

The Egyptian ministers discussed with the WB the infrastructure portfolio to support Egypt’s economic development efforts, stimulating private sector investments, and supporting entrepreneurship, particularly in technologies and digital areas, a statement of the MIIC said on Saturday.

According to the statement, both sides agree on cooperating in regional integration projects in Africa.

For his part, Talaat said that Egypt is witnessing a quantum leap to move to an unprecedented digitalised society, noting that the government launched a package of digital services in Port Said through a pilot project to transform it into a digital city.

Egypt aims to establish a technical structure that allows the private sector to contribute to mobile applications that integrate with the governmental digital system.

Additionally, Diop mentioned that Egypt is a strategic country in the Middle East and Africa region, adding that the bank is keen on increasing cooperation to support Egypt’s efforts toward development including infrastructure projects and digital initiatives, in light of the unprecedented economic and regulation reforms that contributed to enhancing the investment climate.