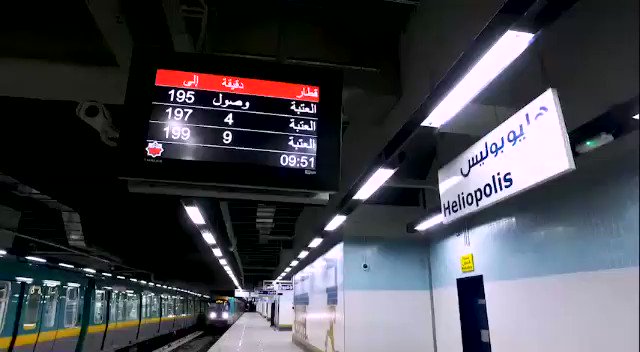 Egypt’s Minister of Transportation Kamel EL-Wazir inaugurated on Sunday Heliopolis Metro Station, one of the biggest stations in Africa and the Middle East. The station is considered part of the fourth phase of the Cairo Metro’s third line.

Built over 10,000 metres in the heart of Heliopolis, the station’s establishment cost EGP 1.9bn, according to El-Wazir.

He stated in a press release that the ministry is currently studying the establishment of three extra stations in the fourth phase which would cost EGP 1.5bn, making the complete allocated budget of the phase reach EGP 17.7bn.

So far, Cairo Metro’s third line cost EGP 97bn. The three-level station contains eight exits, and a number of shops vacant to be rented “which the ministry plans to be a source of income for the station,” according to the Ministry of the Transportation’s official Facebook page.

El-Wazir also stated that the ministry is still constructing the third phase while working on the forth.

The third phase of the metro’s third line is divided into three stages. The first stage covers a length of four km. Its four underground stations are Nasser, Maspero, Zamalek, and Kit Kat. That first stage will be completed in 55 months, while the second stage will be 6.6 km long and cover six stations from Sudan Road through Imbaba to the Rod El Farag station, planned to be completed in 65 months. The third stage will cover 7.1 km long with five stations, from Tawfikia through Wadi El Nile, and Gameat El Dowal , ending at the Cairo University station, which is scheduled to be completed in 74 months.