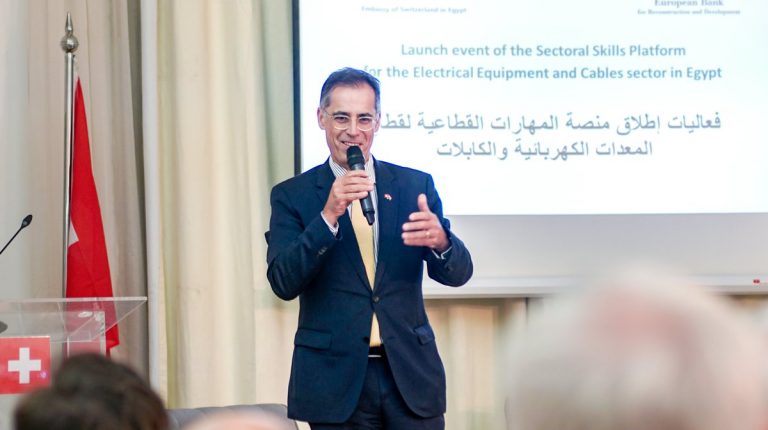 Switzerland is keen on boosting its joint economic relations with Egypt, the Swiss ambassador to Egypt, Paul Garnier, told Daily News Egypt. Garnier stated that the current period witnesses accelerating the efforts and bilateral visits to further improve the cooperation.

Minister of Investment and International Cooperation (MIIC) Sahar Nasr will head to Switzerland accompanying an Egyptian delegation in mid-November, the ambassador added.

Over Nasr’s visit to Switzerland, she is expected to focus on machinery, textiles, and industry sectors, the ambassador mentioned. He added that Nasr will hold several key meetings with the Federal Department of Economic Affairs Education and Research (EAER), and the Swiss business community leaders.

“The idea of Nasr’s planned meetings is to advance  economic cooperation. The Egyptian embassy in Bern and the MIIC are intensifying their connection to perfectly prepare for the visit,” the ambassador said.

Both countries already inked the required agreements for boosting their business relations, the ambassador stated. “We already have the agreements in the fields of investment protection and free trade association with the European Union (EU) as Switzerland is a member of the EU, so I don’t think the visit will witness inking new agreements,” he added.

The environment sector is one of the most interesting sectors for the Swiss companies’ investments in Egypt as they have a very advanced know-how and technologies, the ambassador mentioned.

Moreover, Raymund Furrer, the head of Switzerland’s Economic Cooperation and Development Division and Delegate of the Swiss Government for Trade Agreements, visited Cairo from 7 to 11 October.

The event took place on 10 of October 2019 at the Swiss Embassy’s Office for International Cooperation in Egypt and hosted numerous high-level representatives from the Egyptian government, the United Nations, various academic institutions, the private sector, and civil society.

The event was inaugurated by Garnier. In his address, ambassador Furrer highlighted SECO’s involvement in urban development worldwide and emphasized the need to reduce urban inequalities, thus leaving no one behind.

The event represents another example of the fruitful cooperation between Egypt and Switzerland, which has continuously grown stronger over the past 40 years.

Urban development has gained major relevance in Egypt in the face of rapidly increasing population rates and represents an ever more important field of cooperation. The positive impact of Swiss-Egyptian joint initiatives is best exemplified by the “Hayenna”: Integrated Urban Development Project, which was launched last year in the Governorate of Qena, funded by SECO and technically implemented by UN-Habitat and the General Organization for Physical Planning (GOPP).

The panel discussion aimed at providing a platform for dialogue and collaboration between different actors involved in urban development and planning.

Over the past decades, inequality, segregation, and exclusion have become the most pertinent phenomena impeding  economic growth, social sustainability, and lasting peace.

Over 75% of the world’s cities grew more unequal over the past 20 years, making urban environments physical manifestations of inequality. The discussion stressed the importance of spatial inequality and urban polarization to ensure a competitive system of cities providing quality of life for all.

They have undermined efforts to enable effective urbanization in Egypt as well. The event acknowledged the need for joint action towards making Egypt’s cities more inclusive and equitable. Co-organized by SECO and UN-Habitat based on their ongoing cooperation, the panel discussion constitutes part of Urban October, an annual initiative by UN-Habitat that aims to enable discussions around urban sustainability.