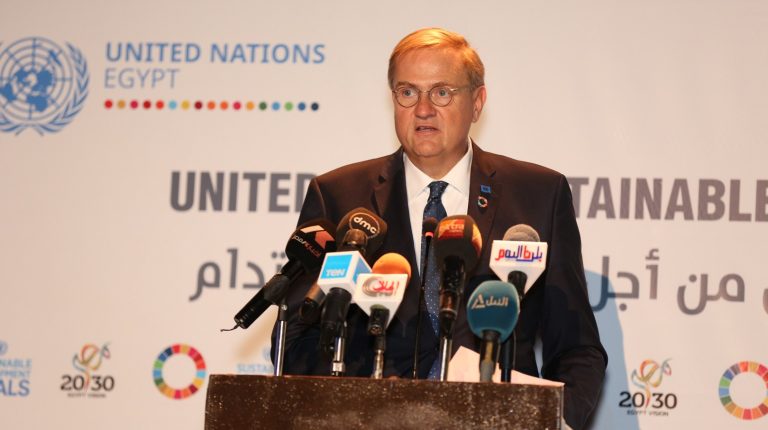 The United Nations (UN) agencies in Egypt are committed to promote a workplace free of single-use plastics, said UN Resident Coordinator Richard Dictus, over his participation at the event organised by the UN on Saturday under the auspices of Egypt’s Minister of Environment Yasmine Fouad to commemorate the UN’s 74th anniversary.

The participants cleaned parts of the Nile River in cooperation with the initiative “Verynile” that kicked off earlier this year, aiming to combat the Nile pollution and find a permanent solution to the problem.

The volunteers were able to collect 1.5 tonnes of plastic waste, Dictus said, explaining that the volunteers included refugees, representatives from the Ministry of Environment, in addition to UN employees in Egypt.

The UN is composed of 21 agencies, funds, programmes, and offices in Egypt, representing a wide array of mandates for development that have the common purposes of leaving no-one behind and ensuring inclusive development for all.

The event aimed at highlighting the critical importance of protecting the planet, by ensuring the sustainability of the Nile River for the people of 11 African countries, especially Egypt, who depends on its resources and ecosystems for livelihoods.

The organisers of the event also aimed at raising public awareness of the dangers of plastic pollution, which represents the most widespread problems facing the world today.

Three hundred million tonnes of plastics are produced every year and a half, which is useless after a single use and only 10 to 13% of plastic is recycled worldwide. Plastic pollution in Egypt represents about 42.5% of the plastic pollution in the Middle East and Africa region.

The improper management of plastic waste is a serious challenge in Egypt as well as many other countries as it contributes to environmental degradation and causes negative public health consequences, according to the UN’s website in Egypt, adding that only 30 to 60% of the plastic waste is collected, leaving tonnes scattered throughout cities and streets that eventually find their way into rivers, seas, and oceans.