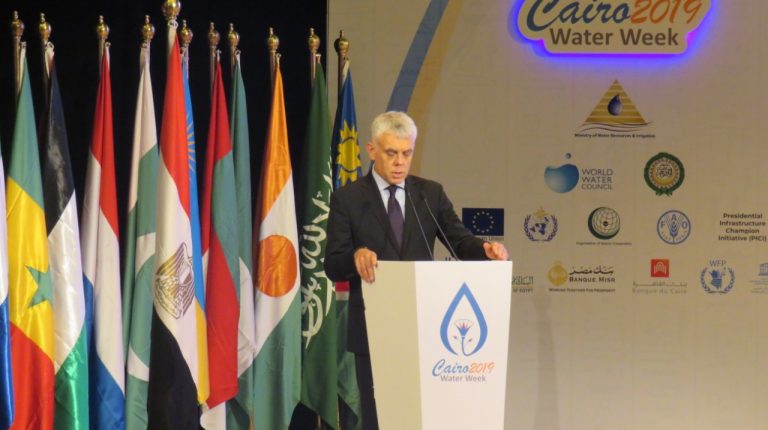 “The water sector is a top priority for the EU, this topic is – and will remain – one of our main pillars of cooperation with Egypt. Investing in human capital and infrastructure will go hand in hand while ensuring the presence of strong public awareness and public-private partnership,” said Maciej Popowski, Deputy Director-General for EU Neighbourhood Policy and Enlargement Negotiations during his opening remarks in the 2nd Cairo Water Week (CWW).

Popowski added that they have provided more than €500m in grants, leveraging concessional funds of nearly €3bn in the water sector from European financial institutions, in response to water challenges in Egypt since 2007.

Popowski stated that the EU co-funded water programmes extend over 12 Egyptian governorates providing nearly 25,000 permanent jobs, and nearly 500,000 short term employment opportunities mainly in rural areas. This shall help in improving the quality of life for nearly 16.5 million inhabitants in Egypt by the year 2023.

During CWW, high-level meetings are scheduled to be held, including Egypt-UfM Forum for Governance and Water Management, organised by the EU funded project “EU-WATER STARS”, the 2nd meeting of the OIC Water Council, the Presidential Initiative for Infrastructure in Africa, the Egyptian-Dutch Expert Committee on Water Management, as well as the first meeting of the Joint High Committee for Water and Agriculture.

Within the framework of the cooperation between the EU and Egypt, Prime Minister Mostafa Madbouly launched today the second CWW in the presence of Mohamed Abdel Aty, Minister of Water Resources and Irrigation, and Maciej Popowski, along with Nasser Kamel, Secretary-General of the Union for the Mediterranean (UfM), Yousef Bin Ahmad Al-Othaimeenthe, Secretary-General of the Organisation of Islamic Cooperation, representatives of the League of Arab States, and experts in the water sector from around the world.

The Ministry of Water Resources and Irrigation, in collaboration with national, regional and international partners, is organising this week’s events to promote water awareness, reflect on the most pressing water challenges, and take action to implement and manage.

The CWW 2019 activities will take place from 20 to 24 October, with more than 500 participants from different countries, which will be an opportunity for academics, scientists, policymakers, and water resources experts from around the world to present and discuss key issues, plans and actions related to responding to water scarcity challenges.