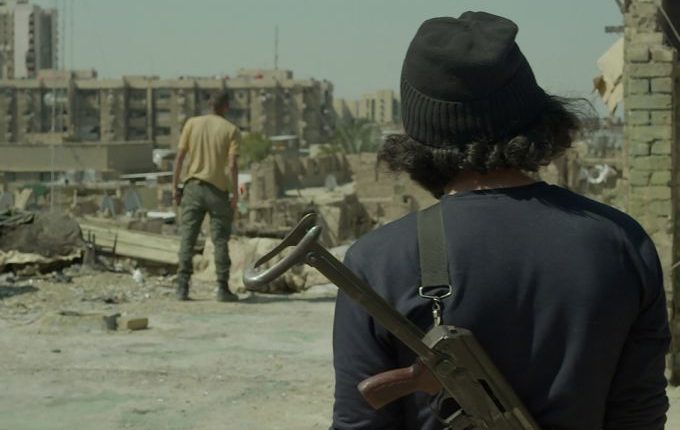 The Iraqi film was described by the jury as a work where “tension is created from the beginning and is tightly maintained until the end.”

“This is a mature, grown-up movie and the director exhibited confidence and understanding of cinema language which set the film apart. [It was] good to see a strong gender-balanced cast,” the jury added.

Haifa Street was one of the most dangerous locations during the civil war in Baghdad, in 2006. Tariq, a 23-year-old sniper, kills 45-year-old Ahmed in front of the home of Su’ad when he comes to ask for her hand in marriage. Tariq prevents anyone from reaching Ahmed’s corpse – including Su’ad and her children, Salam and Nadia. As the family faces the arduous task of recovering Ahmed’s body, the conflicts among Su’ad, Salam, a devout Muslim who rejects the idea of his mother’s remarrying, and Nadia, who is torn between personal ambitions of liberation from male power and her sympathy for her mother, fester. This family drama is set against the question of why Tariq refuses to allow Su’ad to recover the body of her beloved.

The second New Currents award was handed to Vietnamese director Tran Thanh Huy for his film Rom. The jury praised the film as having “amazing energy combined with excellent performances and some spectacular camera work to make a standout film. The use of real, live locations impressed the jury greatly and the opening and ending were very satisfying.”

The film follows a young bookie in bustling Ho Chi Minh City as he tries everything he can to help the residents of an old apartment complex keep their homes and fulfil his dream of finding his parents.

The Kim Jiseok Award jury for third features having a world or international premiere in A Window on Asian Cinema, headed by Iranian director Mohsen Makhmalbaf, gave the award to Sarmad Sultan Khoosat’s Pakistani drama Circus Of Life “for showing the fragility of privacy for human beings in the double-faced modern-traditional society as well as its fluent control on the narrative” and Pradip Kurbah’s Indian feature Market “for its compassionate responsibility for a poor community and for its simplicity and harmony.”

The first BIFF Mecenat Award went to Kim Jeong-Keun for his film Underground. The film is a multi-sensory documentary film that guides us to the underground world we have never seen before. It captures various countenance and depicts segmented fields of labourers working in inconspicuous places, and threatening anxiety through multilayered perspectives and sophisticated sound.

While the second award in the same category went to Hugh Ning for his film Noodle Kid. The director, Huo Ning took a lot of time to build the relationship with his object and succeeded in sneaking into the most intimate moments of his family. This royalty to the foundation of documentary filmmaking was very impressive while many documentary films seemed to neglect such fundamental efforts and stay just on the surface of things.

the documentary shows Ma Xiang’s face age by seven years. It not only implies a time-lapse, but also the influence of capitalism on the changing conditions surrounding him. In those changes, only the religious rituals and the steam of ramen signify the link between different times and spaces. This is a very traditional documentary film in terms of following one person but gets its utter strength from that simplicity.

In this year’s Korean Short Competition, many outstanding films were describing the socioeconomic difficulties which the Korean youth is facing today. The award went to Jin Seong-moon for her film Hello. The film goes one step further and shows much consideration about the new cinematic expression of socioeconomic difficulties among Korean youth. While the subject is gradually brought up by the narrative of finding a missing friend, the delicate emotion is consistently maintained, and the great cinematography and the fascinating ending well supports the film. We selected this film for its effort to consider the contemporary issue and the unparalleled cinematic expression

This year at the Busan Film Festival, the NETPAC jury gave their award to Moving On by Yoon Danbi. The film reflects better -in the selection of a total of 13 titles -the guidelines and the spirit of the Award itself putting a lot of attention to new directors and highlighting new talents.

Moving On by Yoon Danbi is that type of film. It is a debut feature by a young and new female director who was able to show a very personal, mature, and impressive directing style to tell the story of a common family while going deeper to make a portrait of 3 generations of human beings. It is also a strong example of a coming-of-age movie focused on the complex life of a female character and her progressive step-by-step understanding of the adult dimension.

Moving On is a movie capable of delivering an important and touching message underlying the importance of being a family despite the everyday difficulties and the importance of respect they each feel. There is an amazing scene in the movie that even stands amongst the others and depicts in-depth the grandfather’s character with the use of a nostalgic song. Thanks to that moment the main protagonist acts as an observer who eventually overcomes the feeling of loss and decides to move on with her life and to start her journey into womanhood.