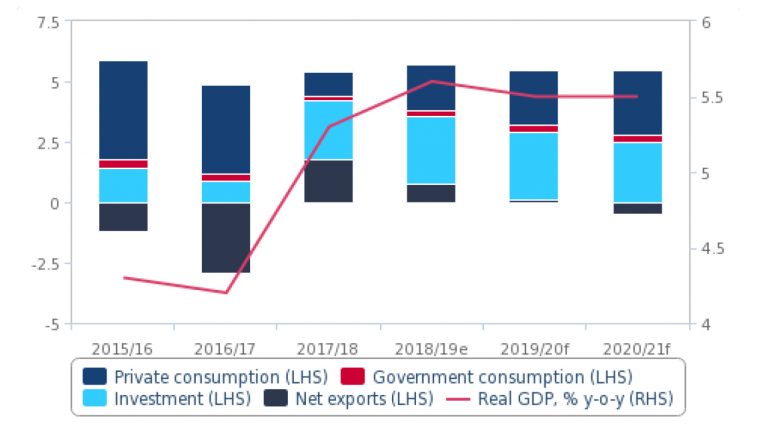 “While this would mark the third consecutive fiscal year of widening in the current account deficit, we note that the deficit still compares relatively favourably to its 10-year historical average of 4.0%,” it added.

It explained that the widening trade deficit will drag most on the current account, driven by a rise in non-oil imports. 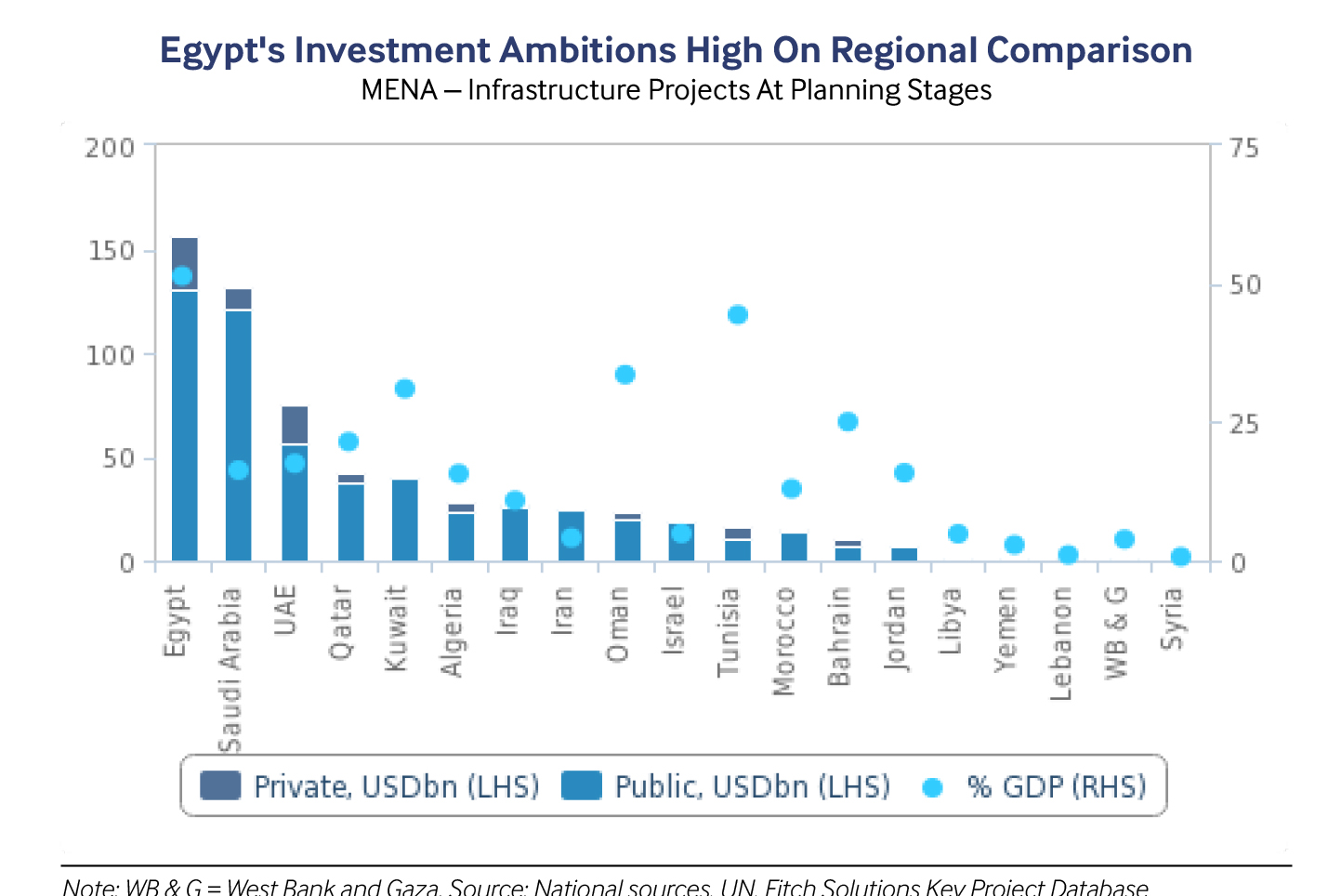 “ With foreign direct investment flows still small, Egypt will continue to rely on the issuance of external debt to fund its current account deficits, but we note that its foreign reserves buffer has grown in recent years,” according to Fitch Solutions.

On a bright side, Fitch Solutions foresees that Egypt will see an uptick in growth rates over the next decade, in part due to base effects from five years of political turmoil, but also because of ongoing reforms and the inherent advantages in the Egyptian economy – namely a large, growing population, vast hydrocarbon resources and a strategic geographical location.

“In the short-to-medium term, investment into hydrocarbons and government projects will be a key driver of growth; however, in the longer term, we expect the non-hydrocarbon private sector to take on an increasingly dominant role,” it further forecasts.

It revealed that the growth in the next decade will compare quite favourably to the weighted Middle East and North Africa (MENA) average (excluding Israel) of 3.0% and nearby competitor Morocco’s 3.7%. “We note that this rate of expansion would be well above the 3.6% average recorded over the past decade and that it would also make Egypt a clear regional outperformer, given that our forecast for MENA’s weighted average growth stands at only 1.8% in 2019-2020,” Fitch Solutions added.

Fitch Solutions expects growth in the Egyptian economy to pick up steam in the coming years with fixed investment becoming an important contributor.

It expected that investment will contribute most to growth this fiscal year, driven by fast-rising public spending on capital projects.

Fitch declared that according to its Key Projects Database, Egypt currently has some $31bn worth of projects under construction, driven by the energy and transport sectors as well as residential, industrial and commercial projects in new cities.

“Moreover, the projects currently in planning stages are valued at a staggering $157bn, equivalent to 51.4% of GDP, both the highest rates in the MENA region,” Fitch Solutions revealed.

It added that the economy will continue to be dominated by private consumption, though the fixed investment will see the fastest growth rates in the short-to-medium term.

In terms of government consumption as a share of GDP, Fitch stated that it will likely decline over the long term.

Egypt’s government has shown a strong commitment to reducing the fiscal deficit and looks likely to remain in power for the foreseeable future, the report said. It added that although the intensity of reform will most likely ease now that the 2016-2019 IMF loan deal has concluded, the government’s high debt load will still necessitate continued reductions in expenditure.

“We also believe that the authorities will be keen to shift resources away from consumption onto capital spending,” it explained. 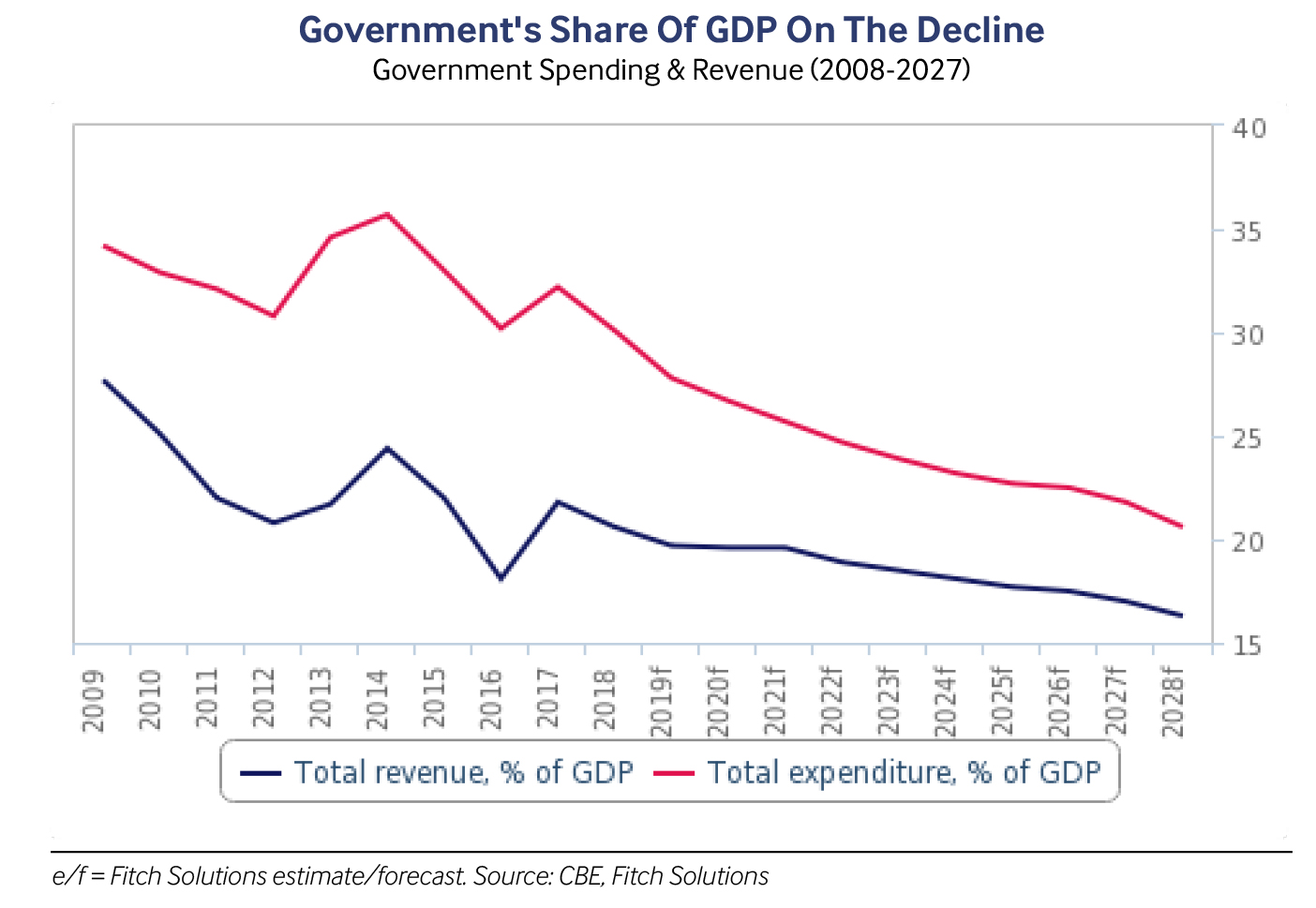 Inflation to continue downward path, albeit price growth will remain high on a global comparison

On the other hand, Fitch solutions predicated that headline inflation in Egypt will trend lower over the coming years as fiscal consolidation eases, forecasting price growth to average 7.9% y-o-y over the coming decade compared with a peak of 29.6% in 2017and 14.4% in 2018.

“That said, despite our view for somewhat lower inflation than in previous years, it must be stressed that price growth will remain high on a global comparison. This is due to factors such as the robust real GDP growth that we forecast in Egypt throughout the next decade, creating demand-pull pressures, as well as our Oil & Gas team’s expectation for oil prices to trend upwards, at least until the mid-2020s,” Fitch Solutions stated.

Regarding Egypt’s budget deficit as a share of GDP, Fitch Solutions expected that it will continue to narrow in this fiscal year, marking its fourth consecutive fiscal year of narrowing.

“We expect the deficit to come in at 7.1% of GDP in FY2019/20, down from an estimated 8.2% in FY19 and 9.5% in the year before that. This would represent the smallest budget shortfall in over a decade,” according to Fitch Solutions.

It also showed out that Fuel price hikes will lower subsidy spending, although higher wage and investment spending will still keep overall expenditure growth in line with the FY2018/19 level. 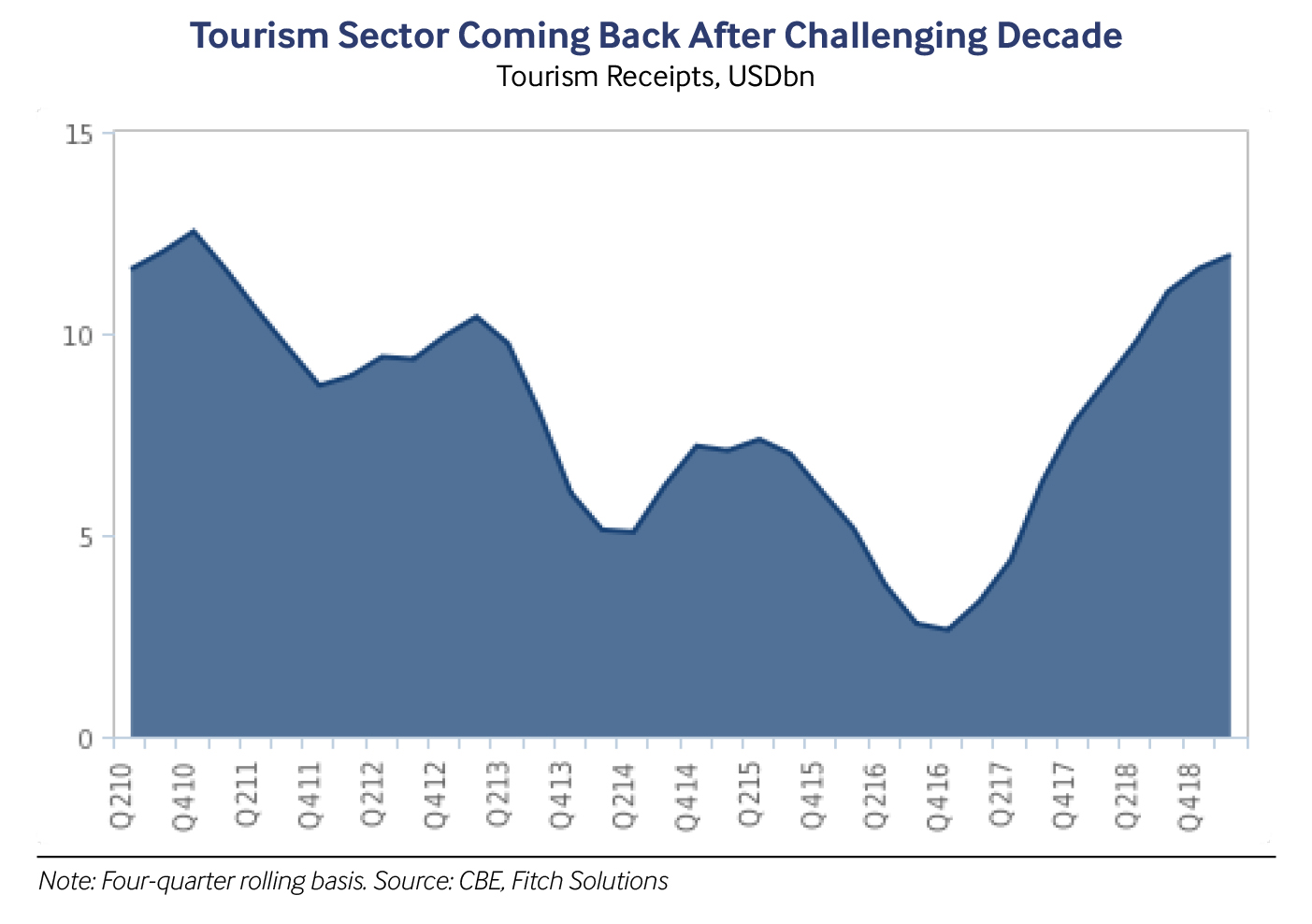 It continued that with narrowing fiscal deficits and high levels of economic growth, Egypt’s debt load will continue to gradually shrink, albeit from a high base.

“Egypt’s total public debt-to-GDP ratio has risen sharply over the last decade, and the impact of the 2016exchange rate devaluation served to push the ratio to over 110%. The government aims to lower the debt ratio to 88% of GDP by June 2020 and further to 80% by June 2022. Our forecasts are largely in line with these targets, although we reiterate the downside risk to policy implementation,” it predicts.

On the business environment side, Fitch Solutions stated that there is also much room for improvement, as illustrated by Egypt’s still-low ranking in their Operational Risk Index (96th out of 201 states globally).

It explained further that although Egypt’s government has undertaken major regulatory reforms in the last couple of years, however, more is needed to bring investment, business operations and labour market frameworks in line with international standards.

“Similarly, while the government is investing heavily in capital projects, Egypt’s infrastructure deficit will take time to close,” it asserted.