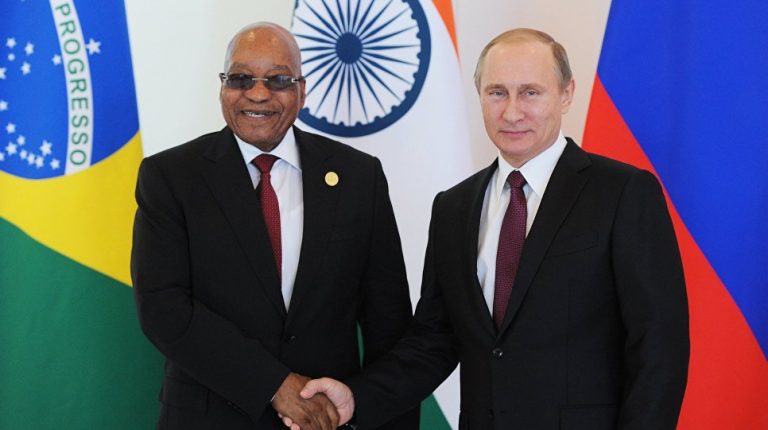 A new phase of the strategic partnership between Africa and Russia is expected to kick off through a first-of-its-kind Afro-Russian Economic Forum which will be held in Russia’s Sochi city on 23-24 October. The Forum will be co-chaired by Egyptian President Abdel-Fattah Al-Sisi and Russian President Vladimir Putin.

The forum will be a turning point in the path of cooperation between the African continent and Russia and is expected to enhance economic and trade relations.

Russian President Vladimir Putin proposed the idea of holding an African-Russian summit for the first time since his participation in the BRICS summit – which includes Brazil, Russia, China, India, and South Africa – in Johannesburg on July 2018. The decision to create the forum came after a long 10-year negotiation process.

In a message to participants in the forum, Al-Sisi said that African countries and Russia have common positions in their international actions based on the principles of respect for international law, equality, non-interference in the internal affairs of states, the peaceful settlement of disputes, and a commitment to multilateral actions in accordance with the two sides’ similar vision of how to confront new international challenges.

“African countries have enormous potential and opportunities that will enable them to join the world’s developing economic powers after optimisation,” Al-Sisi, who is the current chair of the African Union (AU), stated.

Africa has made good progress in terms of its growth rates over the past decade, with the economy expanding by 3.55% in 2018, he mentioned

The African Continental Free Trade Agreement (AfCFTA) took effect at the AU summit in Niger in July 2019 and offers a range of new instruments for growth.

AfCFTA was officially launched at the African summit in Niger’s capital, Niamey, in July, which is the largest global summit since the founding of the World Trade Organization in 1995. The zone is comprised of about 2.1 billion people, domestically, and has a GDP of about $3.4 trillion.

AfCFTA will contribute to increasing intra-African trade volume from 17% to 60% by 2022, mainly reducing imported goods, building manufacturing and production capacity, strengthening infrastructure projects in the African continent, creating a single continental market for goods and services, and facilitating the movement of investors and businesspeople.

President Al-Sisi hopes that the Africa-Russia Summit would serve to establish constructive strategic relations based on cooperation between the two sides in various fields, which will help realise the hopes and aspirations of the African people and the friendly Russian people.

Ambassador Ehab Nasr pointed out that Egypt’s presidency of the African Union and the leadership of President ِAl-Sisi of the African continent in 2019 and its relationship with Russia played a key role in the success of the forum’s preparation.

Nasr stressed that “Egypt is Russia’s first partner from the African continent and the volume of trade between Cairo and Moscow makes up 40% of the trade volume between Russia and the whole of Africa.”

Nasr said that “Egypt is the starting point for Afro-Russian cooperation, soon to be experienced by other African nations, in light of many projects which we hope within the next period to be implemented, led by Russian industrial zone in the Suez Canal Economic Zone.”

The forum will focus on a large number of issues of mutual interest and regional and international issues, ways to enhance cooperation between the two sides’ political, economic, and cultural relations, strengthen the sustainable development of the African continent. Furthermore, it hopes to find ways to take advantage of investment opportunities available to both sides, fight against terrorism and cross-border crime, as well as cooperating for other challenges and risks to regional and global security.

The leaders of Russia and Africa will issue a joint statement at the end of the forum, speaking about the results of discussions and recommendations on strengthening relations between the two sides in all fields in the coming years.

The forum will be held in light of successive regional and international changes, with increasing interests of major countries including the United States, the European Union, China, Japan, and India to strengthen economic and trade partnership with Africa as a whole.

The former assistant foreign minister said during a televised phone interview that the forum will try to make up for what has been lost and restore relations that Moscow had with African countries during the former Soviet Union.

He pointed out that the Sochi Summit meetings went over very ambitious topics and the reflection of Russia’s desire to have strong and sustainable access to the African continent, pointing out that there are agreements over several topics to be signed in the forefront of the fight against terrorism, in addition to cooperation in energy, road transportation, railways, industry, and human resources training.

In the same context, leaders from Russia and Africa, representatives of Russian, African and international trading companies, public sector institutions, and major trade blocs of the African continent will participate in the economic forum on the sidelines of the Sochi summit.

The forum will also go over developing bilateral cooperation in scientific research and education. Leading companies, ministers and international experts on ways to strengthen the partnership between Russia and Africa in all fields, including the applications of peaceful nuclear technology in development.

The forum will include a panel discussion entitled “Eurasian Economic Union – Africa: Trends and Prospects for the Development of Integration and Cooperation Processes” with the participation of the Chairperson of the Eurasian Economic Commission (EEC) Tigran Sarkissian and the Secretary-General of the East African Community (EAC) Liberat Mfumukeko.

An exhibition of trade partners and their exhibits will be organised on the sidelines of the Afro-Russian Economic Forum to introduce the economic, scientific, environmental and cultural capabilities and innovations of the countries participating in the forum. The participants will showcase several projects and advanced technologies in some sectors including mining, chemistry, machinery, energy, agriculture, transport, and public health.

Major countries, including Russia, see Africa as an important player in the economic arena and for international relations thanks to its natural and human resources and huge economic potential, where the business environment has witnessed a marked improvement in a number of African countries, which contributed to the increase of foreign direct investment in the continent, in addition to the rapid growth of a number of economic sectors in Africa such as trade and energy.

The Russian Foreign Ministry recently stressed that Africa is an important partner for Russia and relations with the African continent are independent and unaffected by fluctuations in the international community. The Russian side believes that advanced agricultural and technical projects, medicine, energy-saving technologies, logistics and infrastructure projects open broad prospects for strengthening economic cooperation between Moscow and Africa.

On the other hand, many African countries look forward to diversifying their partnership with the Russian side based on mutual interests and full respect for national sovereignty.

Statistics show that the volume of trade exchange between Russia and African countries increased by more than 17% last year, exceeding $20bn, and between 2010 to 2017, the total volume of Russian exports to Africa increased by three times from $5bn to about $15bn.

The past five years have seen remarkable growth in the activities of Russian companies in several African countries including Zimbabwe, Angola, Gabon, Zambia, Mozambique, and South Africa in many fields including mining, energy, and oil.