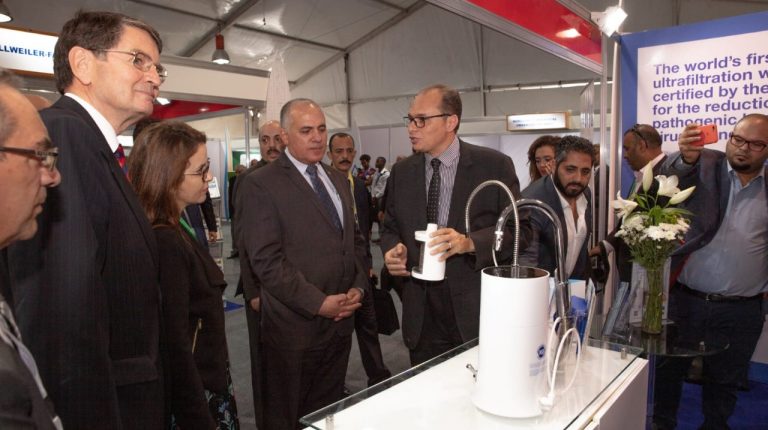 The Ministry of Water Resources and Irrigation hosted an exhibition on the side-lines of the second edition of the Cairo Water Week (CWW) held from 20 to 24 October in Cairo to promote and raise awareness over water issues.

The exhibition included numerous booths for organisations such as the World Meteorological Organisation (WMO), the Food and Agriculture Organisation (FAO), the National Water Research Centre (NWRC), the Netherlands Water Partnership (NWP), and other organisations.

One of the main silver exhibitors in the exhibition were the Science Technology, Engineering, and Math (STEM) schools. The curricula in these schools are based on innovation technology. Accordingly, its students presented two projects, one for treating sewage and industrial waters, and the second for an innovative irrigation system based “hydroponics,” a method of farming by immersing plants in water without soil.

One of the students involved in the projects, Mostafa Mahmoud, told Daily News Egypt (DNE) that with the help of the smart robot a school students developed, they were able to measure moisture in different parts of soil and estimate which parts of soil need water to provide it with its needs.

The robot has a water tank to offer the water needed for the soil, and the entire system is controlled with a mobile connected to the robot.

Home Pure Co, is a diamond exhibitor which presented a home pure filtration system with nine stages of filtration and more than 35 ultra-tech filter technology.

Speaking to DNE, Mohamed Fathy from the production department in the company explained that the new purification system presented by Home Pure consists of nine stages such as the sediment filter, high-performing activated carbon block filter, and the antibacterial silver-lite stone.

October University for Modern Sciences and Arts (MSA) also participated as a silver exhibitor. A team from the university presented new techniques in remote sensors to measure the water level in lakes and canals. The entire system is local-made by the team of the university. The new technique is operated by solar power.

The Ministry of Military Production also participated through its purification unit which helps in rationalising the use of water through increasing the power of pumping water in taps but decreasing the amount itself. The system is now generalised in most governmental facilities.

Mahmoud Al-Garf: A new road map for industrial investments is being implemented

Quality food, one lettuce at a time

Changing futures one song at a time