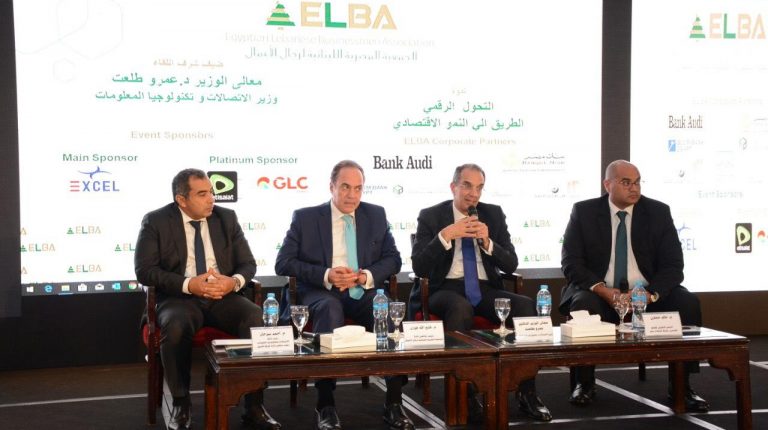 Amr Talaat, Minister of Communications and Information Technology, stressed that Egypt stands side by side with Lebanon on the back of recent incidents in the country. He also appreciated Lebanon’s steadfastness in transforming into a modern technological society.

It came during his speech at a symposium held by the Egyptian Lebanese Businessmen Friendship Association (ELBA) on Tuesday evening, entitled “Digital transformation: the way to economic growth”.

The minister explained how the ministry is putting in great effort in order to keep Egypt at pace with the rest of the world. The government hopes to achieve digital transformation of Egypt and plans to do so through two axes; automation of the government, and training Egyptian youth on technological developments. This will also allow for the Egyptian economy to increase its competitiveness in domestic and international markets.

He explained that the first step to build a digital society will be moving the government to the New Administrative Capital and get rid of the paper-based bureaucracy. He explained that a digital government requires a digital transformation of services through the development and modernisation of information infrastructure and improvement in addition to a strong legislative framework that provides e-commerce governance, data security, and the preservation of seller and buyer rights. Talaat also noted that legislation have been promulgated and are intended to be completed in order to combat internet and digital offenses.

The minister revealed that the government aims to automate three services nationwide by the end of January 2020, which includes providing all traffic services excluding technical inspection of cars, launching documentation and agency services, as well as supply services.

The minister said that the three services will be available to citizens through a digital platform or government portal, telecommunications centres, and mobile applications besides the Egypt Post branches.

He also confirmed that the post offices will carry out financial services provided by the Micro, Small and Medium Enterprises Development Authority in order to better facilitate funding for young people looking to start their businesses.

Talaat added that the second phase of the project aims to provide services more proactively and will include alerting the citizen in case of residency change in order to transfer some services such as electricity metres or supply services. Consumers will also have these services provided through kiosks in modern gas stations. “The driver will be allowed to renew the license at the services kiosks while refuelling,” Talaat said. He noted that the services will also be provided via call centres and delivery services if a person does not need to visit government facilities.

The minister pointed out that the three automated services are part of Egypt’s project to digitise government services, which has already begun in a pilot application in Port Said governorate and includes the provision of 170 government services at a cost of EGP 8bn and a period of 36 months. The circulation of the automation project to the rest of the country would require linking 33,000 government facilities in 27 governorates with fibre-optic networks to prevent any interruptions or disruption to service.

He revealed that 170 mechanised services will be provided in Port Said governorate by the end of this year, where the first launch of the project started in the governorate by providing 18 services last July, 25 services in September, and then 34 digital services in October, He noted that 800 service sites and a government building in Port Said have been connected to fibre-optic networks.

The minister said that with the completion of three fully automated projects in addition to the automation of 170 services will be followed by larger projects, such as the new comprehensive health insurance system, farmer card, and a restructuring of the national tax system.

He explained that the comprehensive health insurance project, which began in Port Said, will be fully automated, starting from verifying the eligibility of the citizen and then automating all healthcare services such as disbursing medicines and financial settlements, noting that the second phase of the project will be in four governorates: Ismailia, Suez, Luxor, and Aswan.

Talaat explained that the farmer card project aims to automate the fertiliser and chemicals system, rationalise water usage, and preserve the state’s financial resources by ensuring the delivery of subsidies to its rightful beneficiaries. The farmer card will also verify land acquisitions and cultivated areas in order to develop an integrated agricultural map that will help measure the amount of water needed for agriculture and the season’s crops, and to clarify agricultural gaps between production and consumption to achieve stability in goods and markets

He pointed out that the implementation of the project in Port Said and Gharbia governorates are just the first stage, with plans to expand to all governorates within 24 months. Talaat pointed out that the application of the project and its circulation will provide an information map on agriculture in Egypt and will better handle the encroachment of agricultural land and reduce wrong practices in obtaining government support unlawfully.

He added that the project of restructuring the tax system is being implemented in cooperation with the Ministry of Communications and the Ministry of Finance and aim to achieve tax justice and discipline for the tax community. This newfound tax structure will expand the tax payer base without burdening the taxpayers, thus increasing tax revenues.

He stressed that his ministry is working in cooperation with the Ministry of Youth and Sports to develop youth centres scattered around the country, which is estimated to be about 4,000 youth centres. This will better help the country train and create the next generation to keep pace with technological advancements and deal with various applications. Talaat explained that the ministry is looking to connect fibre optic cables to 100 centres by the end of the year.

He added that the ministry has trained 4,000 young people in fiscal year 2017/16 and 13,000 last year, and plans to train 25,000 youth this fiscal year, noting that six new training centres will be established, bringing the total to 12 centres.

Regarding innovation and technology projects, the minister said that the telecommunications sector produced 1,500 new companies last year, and that major foreign companies have taken over nine of them, noting that Egypt became the second fastest growing economy in the Middle East last year, of which 4% comes from the communication sector, up from 3.2% contribution to GDP last year, with plans to reach 8% in three years.

The minister reviewed the second axis of Egypt’s digital strategy, which aims to develop the health and education sectors along with youth training on digital transformation. He explained that the use of contemporary smart technology and applications have become a key element in increasing an individual’s competitiveness for a job.

He revealed the most important feature in the grand scheme of the project is the construction of the city of knowledge that will be built on an area of more than 200 feddan in the new administrative capital. The first phase includes the establishment of four technology buildings.

Fathallah Fawzy, president of the ELBA, affirmed the Egyptian people’s solidarity with Lebanon in their march to reform, stability, and prosperity.

Fawzy said that the technological revolution and digital transformation in Egypt is the largest step in its overall and comprehensive reform process, which started after President Abdel Fattah Al-Sisi assuming the presidency years ago

Sarhan noted that the automation of government procedures has a positive effect in facilitating access to services for citizens, improving the efficiency of services, reducing bureaucracy, assisting the government in combating corruption, and can create a real database that contributes to drawing development and investment plans on real and realistic bases.

Khaled Hegazy, CEO of Etisalat Misr Corporate Sector, said that digital transformation has gained great importance for Egypt with the launch of the economic reform programme and other giant national projects.

He stressed that the private sector is looking forward to achieving real integration with the government and is encouraging partnership with various government entities to enable itself and the Egyptian youth to play their role in digital transformation projects and provide new ideas to provide digital services to citizens in various fields.