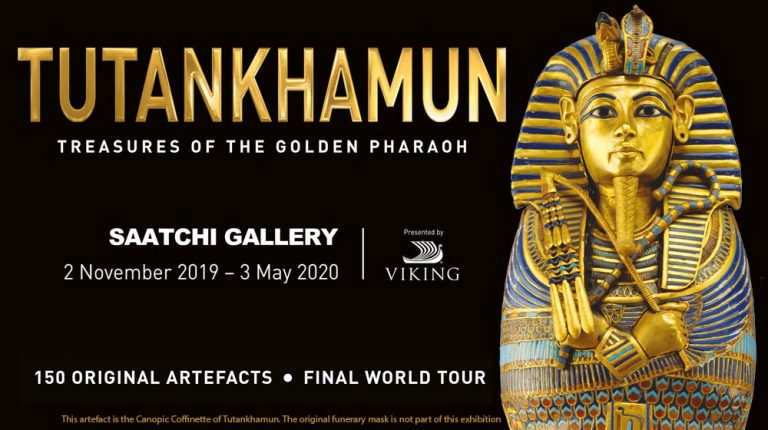 The young Pharaoh Tutankamun’s treasures are to temporarily stay in London for exhibition from 1 November after its tremendous success in Los Angeles and Paris last year. The British capital is to host the exhibition “Tutankhamun: Treasures of the Golden Pharaoh” for six months, as a part of its grand tour in which it is planned to visit five other European counties within its 4-year-temporary exhibition. The exhibition showcases 150 antiquities from the pharaoh’s personal belongings, 60 of which are travelling out of Egypt for the first time.

The antiquities include the world’s most famous golden mask, the gilded wooden bed fashioned especially for his funeral with carved lion feet-golden coffins, and 3D models which the museum prepared in order to take the visitors through time and place to see the glories of the Egyptian civilization.

The Square Mile’s exhibition at the Saatchi Gallery is the ancient Egyptian King’s next stop after it broke the French records as the most visited exhibition in the history of the country, with over 1.4 million visitors. It was also met with a huge success in the United States attracting more than 500 million visitors within its six-month stay. As for London, the exhibition’s official website revealed that tickets are being sold for £26.95 for adults.

The exhibition comes 12 years after the last time London has seen any of the young king’s treasures. In the last temporary exhibition that took place in 2007 at the O2 venue on the banks of the River Thames in south-east London, 130 of Tutankhamun’s belongings were put on display.

Tutankhamun’s exhibition is a part of the Egyptian Antiquates Ministry’s policy to hold several temporary exhibitions across the world for promoting tourism in Egypt, especially ahead of the opening of the Grand Egyptian Museum (GEM).

The exhibition will last until 3 May 2020 before it starts another journey in four other countries, including Australia and South Korea. The tour will last until the end of 2022. After the tour comes to an end, the relics are to return back to the GEM, where they will join the rest of the 5,000 relics found at the king’s burial chamber in 1922.

Minister of Antiquities, Khaled El-Anany, formerly said the total value of insurance for the 166 antiquities of King Tut which are exhibited abroad is $862m.

Grand opening for Festival of Egyptian Culture in Frankfurt