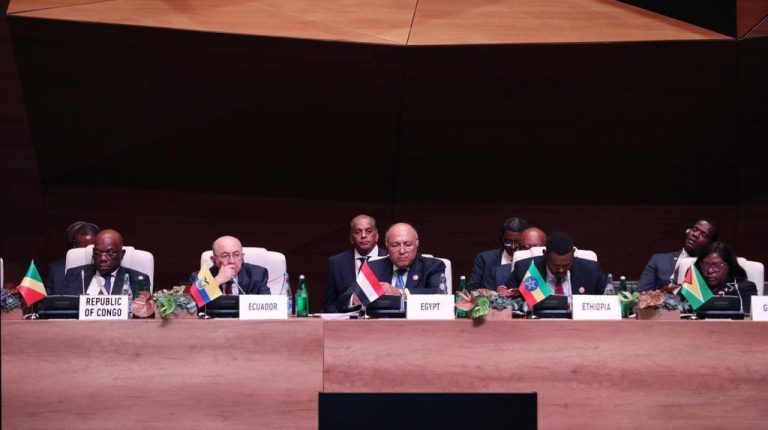 Egypt’s Foreign Minister Sameh Shoukry asserted on Saturday the need to deal with transboundary watercourses and rivers with good faith and in a manner that enhances cooperation and avoids disputes, respecting International Law, a ministry statement said.

Shoukry’s remarks came during his speech at the 18th Summit of Heads of State and Government of the Non-Aligned Movement (NAM) in Baku, capital of Azerbaijan.

Shoukry also said that “the issue of water scarcity has become a threat to many parts of the world, especially the African Sahel region and Egypt.”

On the other hand, he also called for “confronting any attempts to divide the countries of the Middle East or demolish institutions and to reject any efforts to fuel the sectarian or sectarian loyalties.”

He urged on the committing to the principles of the modern national states which based on the principles of equality, citizenship, the rule of law, and the respect of human rights without interfering into the internal affairs of countries as well as rejecting any “foreign occupation,” the statement added.

The foreign minister also asserted the need for accountably of “grave crimes that include genocide, war crimes, crimes against humanity, and the support of terrorism.”

Shoukry also tackled the situation in Libya and Syria, as he asserted that the “Turkish incursion into northern Syria and its occupation to these territories are considered is a violation to the international laws and the principles of the Non-Aligned Movement.” He called for an immediate withdrawal of this “aggression” and its forces from the Syrian territories.

On the Libyan crisis, Shoukry called for the implementation of the UN’s initiative which was approved by the Security Council in October 2017. He also pushed for the political solution to end the crisis, calling for “an immediate stop for supporting terrorism provided by specific countries.”

Moreover, Shoukry praised the stance of the NAM toward the Palestinian cause, as he asserted the need to reach a fair settlement based of the international references, noting that the Arab Peace Initiative is a fair base for such settlement.

Earlier, Foreign Ministers of Jordan, Egypt, and Iraq held a trilateral meeting on Friday on the sidelines of the summit, as they agreed on holding a meeting in Amman next month.

The ministers discussed enhancing economic, cultural, and developmental cooperation and issues of common interest including the Palestinian Cause, Libyan, Yemini and Syrian crisis.

Shoukry also met with UN Under-Secretary-General for Political and Peacebuilding Affairs Rosemary DiCarlo on Friday as he voiced Egypt’s support to the UN’s role in facing the ongoing challenges especially those related to the sustainable development, environmental protection, counterterrorism, and maintaining international peace and security.