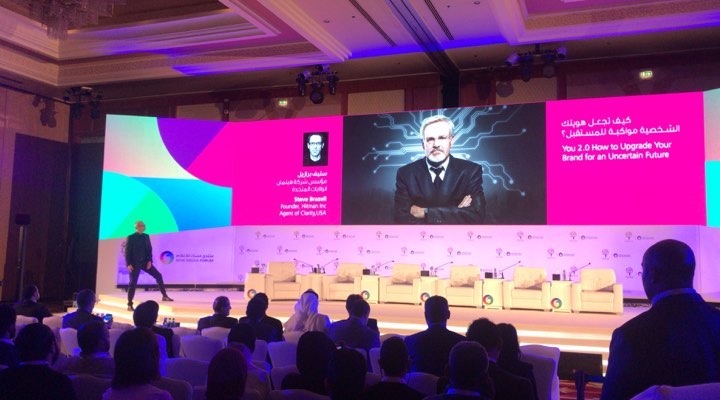 Tackling the potential future usages of technology during the Saudi Misk Media Forum on Saturday, Steve Brazell, the founder of Hitman Inc spoke specifically on how people can upgrade their brands for uncertain future and citied instances on how digital technology spread promptly among world.

Steve Brazell is an American brand and marketing strategist, currently catering for companies in the Middle East and North Africa to develop their brands for worldwide competitions.

Brazell said media revolution takes place every day. Everyday people across the world access information, around 67% are sharing their information on social media and 5.9 billion use google search at the same time.

He added that developing technology would allow 65% to hold jobs that do not exist today, using technologies that has not been invented to solve problems we even did not know we have.

Everything is moving faster than any time in history, radio developed among people worldwide in 38 years, TV in thirteen years, computers in four years, while smart phones reached 50 million people in only three years.

Brazell stressed on the importance of critical thinking for people to ensures the success of their brands and self-confidence for reaching fascinating targets.

He mentioned the ability to focus attention on a specific goal to reach it, is the most important factor of critical thinking.

Brazell referred to Uber company for commuting services, as a successful example of developing brand as it was able to have three million drivers, 75 million customers and 5bn rides worldwide.

He concluded that people should be more critical to improve, get use of all social media tools to excel, and trust themselves to develop, and get ready for the future.

Saudi’s new media centre: a rising portal in the world of digital diplomacy