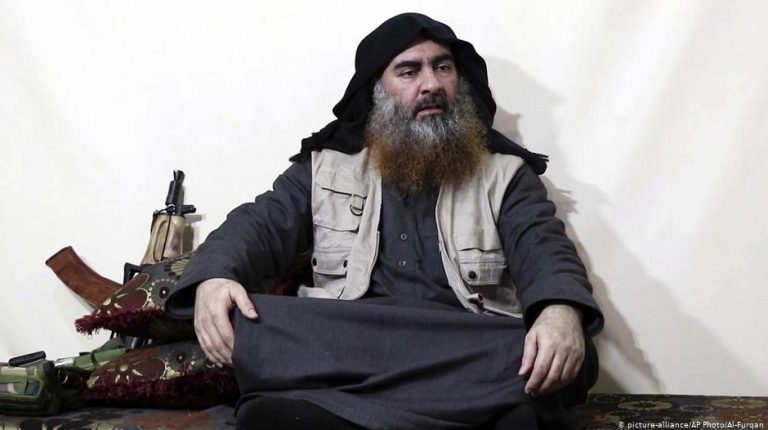 United States President Donald Trump officially confirmed that the Islamic State (ISIS) leader Abu Bakr Al-Baghdadi was killed in a US military operation in Syria which started two weeks ago.

In a televised speech, Trump clarified that the mission would not have been possible without the cooperation of Russia, Syria, Iraq, and Turkey.

Trump’s announcement confirmed multiple reports, published early Sunday, about the killing of the most wanted terrorist in the world, saying that Al-Bagdadi died near Barisha, Syria.

“He (Al-Baghdadi) reached the end of the tunnel as our dogs chased him down. He ignited his vest, killing himself and his two wives. His body was mutilated by the blasts. The tunnel had caved on him,” Trump detailed.

In his speech, the US President denied that the mission had any links to his decree of pulling US troops from northern Syria earlier this month.

The death of Al-Bagdadi shelved a long US hunt to capture one of the most wanted terrorists in the world. The US offered a $25m reward for information leading to his capture.

The US raid is considered the most significant operation to target a senior terrorist leader since the killing of Osama bin Laden, Al-Qaeda’s founder and the mastermind behind the deadliest 11 September 2001 attacks in Pakistan.

An exclusive report published by the American weekly magazine Newsweek stated that the US military conducted a special operations raid that targeted Al-Baghdadi in his hideout in Idlib’s Barisha village where he blew himself up with a suicide vest killing himself and his two wives.

The magazine cited a senior Pentagon official familiar with the operation and Army official who revealed that Al-Baghdadi was the “the target of the top-secret operation.”

The official told Newsweek that US forces entered Al-Baghdadi compound and then killing “himself by detonating a suicide vest.” The leader’s two wives were killed, but no children were harmed.

Earlier on Sunday, Turkey’s ministry of national defence tweeted that “prior to the US Operation in Idlib Province of Syria last night, information exchange and coordination between the military authorities of both countries took place.”

Meanwhile, Syrian Defence Forces (SDF) General Commander Mazloum Abdi also wrote that “for five months there has been joint intel cooperation on the ground and accurate monitoring until we achieved a joint operation to kill Abu Bakr Al-Bagdadi.”

Iraqi state television aired on Sunday footages to what it said to be a US operation in Syria that targeted Al-Baghdadi. Two Iraqi security sources and two Iranian officials told Reuters that they received confirmation from Syria about the killing of IS leader.

The Turkish news agency, Anadolu also reported that “at 12:00 am, early Sunday, eight US fighters and two drones targeted an area near Barisha village and was faced by heavy weapons on the ground.”

Al-Baghdadi’s given name was Ibrahim Awad Ibrahim al-Badri was born in 1971 in Samarra, Iraq.

Al-Baghdadi’s first appearance was when he proclaimed his “Islamic caliphate” in June 2014 at the Great Mosque of Al-Nuri.

Since then, his terrorist IS group strengthened its foothold by capturing vast territories in Iraq and Syria including Al-Mosul and Raqqa, receiving large amounts of money, and having thousands of foreign fighters as well as control over oil wells. He then returned to the scene in a propaganda video in April this year.

The IS group began to relativity retreat in 2016. In October of the same year, Iraqi forces, Sunni Arab tribesmen, Shi’ite and Kurdish fighters launched a nine-month comprehensive offensive supported by the US-led coalition to recapture Al-Mosul from ISIS fighters. In July 2017, the Iraqi government formally declared victory over the terrorist group.

Three months later, the US-backed SDF recaptured the Syrian city and the IS capital Raqqa, after months of battle. In March 2019, the SDF declared that ISIS lost its final stronghold in Baghuz, Syria.

More than 12 thousand ISIS fighters from Syria, Iraq, and many foreign nationals have been held in northern Syria and guarded by Kurdish led Syrian Democratic Forces (SDF), in addition to ISIS-affiliated families of women and children who have been held in outlawed detentions.

Since Turkey began its incursion into northern Syria earlier this month against Kurdish fighters, dozens of IS fighters and hundreds of their affiliated relatives have escaped from these, according to Kurdish officials who accused Turkey of bombarding prisons that hold ISIS fighters.

According to a 2019 report of the “Worldwide Threat Assessment,” published by the US intelligence community, ISIS still “commands thousands of fighters in Iraq and Syria, and it maintains eight branches, more than a dozen networks, and thousands of dispersed supporters around the world.”