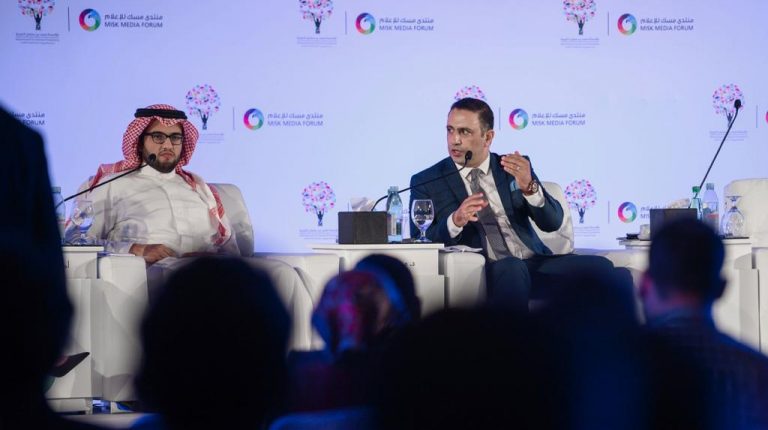 The General Manager of the Saudi News Communication Ahmed Al-Tawayan stated on Saturday that the countries of the Middle East suffer from a serious problem in identifying themselves in the messages they send the world through their online platforms.

The statement came during Misk Media Forum that took place in Cairo. The forum is Saudi Arabia’s premier event, aiming to link media pioneers with visionary leaders and content creators.

Speaking of the country’s official voices and their social interactions, Al-Tawayan talked about the reasons Saudi Arabia took the decision of opening a news media centre, and the stages it went through in order reach internationality.

“The news communication centre is a part of the ministry of foreign affair’s strategy to deliver the message we have to the world from our position as a social economic and cultural power,” he said.

Al-Tawayan who is also a speaker of the Saudi State channel, joined Mohammed Al-Ogabi spokesperson of the Saudi Ministry of Social Solidarity in the session that was directed by Dubai One TV presenter Naoufer Ramoul.

The Saudi media centre currently produces news and podcasts in 30 languages. According to Al-Tawayan, it targets analysing and enhancing the messages the governments send, focusing on three main circles, the internal one which reaches Saudis inside the country, the regional one, and the international circle.

In his discussion, Al-Tawayan pointed out the one of the main struggles for the Middle East Countries is “presenting themselves properly, and their perspectives towards global issues.”

He asserted that digital diplomacy is one of the most essential requirements for all governments, something that the MENA region severely lacks.

“Digital diplomacy requires you find a place for yourself among all the identities countries present themselves online. We could not copy the experience of any other country as every country has its own policy and goals of what it aims to send the world,” he said, adding that it was one of the main elements the Saudi News Media Centre focused on in order to “to introduce ourselves to the world.”

Al-Tawayan additionally mentioned that creating media content is also one of the most “real challenges in the Middle East that we need to overcome and fix immediately.”

“All of ministers wait until the press conferences to target their message, while they can simply hold on a camera and send their message over the social media,” he added.

He concluded that the main struggle they currently face is detecting their target audience.

“If you want to reach out to people, speak their language, but the challenge we face is much harder than any other country because we cannot detect our target audience due to the wide range of audience we have across the world,” he added.