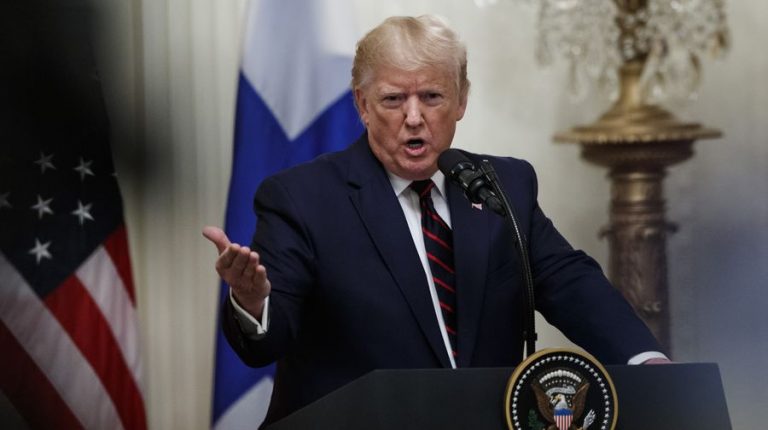 House Democrats on Friday subpoenaed three administration officials for depositions as part of their impeachment inquiry into US President Donald Trump amid escalating partisan tensions.

The subpoenas called for Duffey to appear on 5 November and Vought and Brechbuhl to testify on 6 November.

“The deposition transcript shall be part of the impeachment inquiry and shared among the Committees,” they wrote. “Your failure or refusal to appear at the deposition, including at the direction or behest of the President or the White House, shall constitute evidence of obstruction of the House’s impeachment inquiry and may be used as an adverse inference against the President.”

The impeachment inquiry that Trump is facing was initiated last month by House Speaker Nancy Pelosi after an anonymous whistleblower raised concerns about the president’s interactions with Ukraine.

The whistleblower and Democrats pushing for the impeachment inquiry alleged that Trump abused power by using Congress-approved military aid to pressure Ukrainian President Volodymyr Zelensky into investigating Joe Biden, former US vice president and front-running Democratic presidential candidate for the 2020 election, to help his own political campaign.

The White House has said it will not provide documents or witnesses to impeachment investigators because it considered their investigation unfair and illegitimate.

Trump has denied any wrongdoing and has urged more efforts from Republicans to defend him and challenge the impeachment inquiry.

Before leaving for a Friday event in Columbia, in the US state of South Carolina, Trump told reporters at the White House that he believes the impeachment inquiry is a “hoax.”

When asked whether he was confident he could have the votes in the Senate if the impeachment case moves into the upper chamber, Trump said, “only for one reason, I did nothing wrong.”

The president also dismissed the need for a team to defend him against the impeachment inquiry.

“Here’s the thing. I don’t have teams. Everyone’s talking about teams. I’m the team. I did nothing wrong,” he said.

Trump’s remarks came a day after Senator Lindsey Graham, a Trump ally, introduced a resolution condemning the impeachment inquiry, in which he called the current proceedings “illegitimate and dangerous,” and urged the House to vote to initiate a formal impeachment inquiry, provide Trump with “due process,” and allow Republicans to fully participate.

Graham tweeted Friday that his resolution has been supported by 50 of 53 Republican senators in the upper chamber.

Federal Judge Beryl Howell on Friday ordered the Justice Department to disclose before next Wednesday secret portions of former special counsel Robert Mueller’s investigative report on the Russia probe to the House Judiciary Committee, in a decision that pointed to the impeachment inquiry.

“Impeachment based on anything less than all relevant evidence would compromise the public’s faith in the process,” Howell said.

The Justice Department is reportedly reviewing the ruling and is expected to appeal it.

News emerged Thursday night that a probe by the Justice Department into the origins of the Russia investigation has evolved into a criminal investigation.

It remained unclear when the change occurred but it reportedly gave US Connecticut State Attorney John Durham, appointed by US Attorney General William Barr, the power to subpoena witness testimony and documents, to impanel a grand jury and to file criminal charges.

Mueller, who concluded his investigation in March, wrote in a report that there was no evidence that Trump’s political campaign conspired with Moscow during the 2016 US presidential election. However, the report did not conclude whether the president had obstructed justice.

The Federal Bureau of Investigation began the probe in July 2016, which Mueller did not take over until Trump fired the agency’s director James Comey in May 2017.