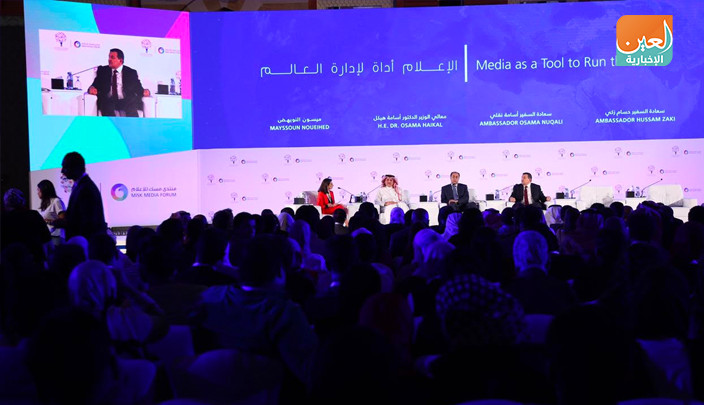 At the world of digital journalism, traditional media portals are fighting to survive the challenges they are facing. With the rapid increase of printing prices, and the mass’ direction towards online media, decision makers struggle to fight their ongoing war.

Throughout the discussion, four of the media personnel elaborated in what they believe to be the future of media content, and whether the classical media portals are soon to die or not.

Lorabi expressed that the content traditional media portals currently provide audience with, whether TV channels, newspapers, or radio stations, is considered extremely weak compared to the one digital media provide users with.

“We have a falling apart media content, and the directors of most of the digital media channels still treat them the way they run the traditional one, whether in the terms of content or flow,” he explained.

Agreeing with Lorabi, Al-Nowaisir said that the media providers in the Middle East treat the topics on both their online websites and newspapers the same way, “which falls most of the time, as each targets different target audience.”

Regarding the creativity of the content provided in both types, Al-Sayed explained that creativity hits its peak online as most of the journalists working for newspapers suffer from financial strains, and are deprived from most of their rights whether financial or physiological.

“Those who work in the digital portals usually provide content to a large number of platforms, which offers them a proper income that allows them to think and come up with creative content. But how would you expect such a thing from a journalist who is broken and tied with a number of financial burdens and responsibilities?” she questioned.

However, the coin does not always positively flip towards the digital journalism side, the industry suffers from a lot of cons. “Online media rarely reflects the complete image of any story,” said Al-Sayed. “In a small concise online story, readers are rarely offered the complete story, with all of its details and aspects, unlike the printed newspaper for example in which readers get to dig deep into the details of the story,” she said.

Mosallam elaborated that online media portals also have severe problems in spreading fake news. “While the sky is their limit when it comes to creativity,  this is not the status quo when it comes to fact checking,” he asserted.

Mosallam added that one of the biggest challenging facing the Egyptian government is the spread of social media news accounts that serve the opposite direction of the country, under the theme of entertainment pages. “We find a number of cooking pages, that are spreading nothing but political news that are against the country and serving the cause of political directions,” he said.

These pages adopt citizen journalism which for Lorabi is an unaccepted term. “From my point of view, there is no such thing as ‘a citizen journalist’, this requires a goal, ethics, and a message which cannot be applied in this case,” he added.