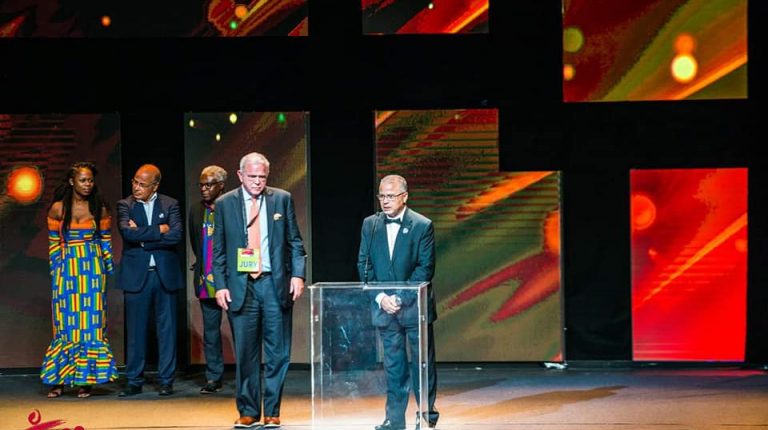 The opening ceremony of the 2019 Carthage Film Festival (Nejib Ayed session) took place Saturday at the Opera theatre in the City of Culture in Tunis.

Several artists, filmmakers, and cinema-lovers attended the ceremony to celebrate the yearly festival. The ceremony was presented by Ahmed El Hafiene and contained many sections. Most notable was the presentation of the jury members as well as a musical show by Sabri Mosbeh and a Japanese music band.

Commemorating the loss of late programmer and critic Nejib Ayed, the ceremony started with a screening dedicated to him. Producer Hassan Daldoul offered Nejib Ayed’s son and daughter, Ahmed and Nadia Ayed, a Golden Tanit to acknowledge their father’s mark left on this festival and to encourage them to follow the same path.

Another video was displayed to pay tribute to the late Tunisian director Chawki Mejri and to some other Arab and African filmmakers who recently left us.

The 15 member jury is made up of producers, directors, scriptwriters and actors. The Grand Jury is headed by the French Senegalese director Alain Gomis who was joined by Japanese filmmaker Koji Fukada, Algerian actor Hassan Kachach, as well as the Tunisian director Mahmoud Ben Mahmoud, the Moroccan director Meryem Benm’Barek-Aloïsi, the Zimbabwean filmmaker Tsitsi Dangarembga, and the Lebanese director Yasmine Khlat.

The documentary jury is however presided over by the American screenwriter Jerome Gary, who will work with the Congolese film critic Djia Mambu, the Cameroonian director and film critic Jean-Marie Téno, the Tunisian writer and director Mohamed Mediouni and the Egyptian filmmaker Mohamed Siam.

The First Feature Film Jury (Taher Cheriaa Awards) consists of 3 members headed by the Palestinian Swedish producer and director of the Malmo Arab Film Festival, Mouhamed Keblawi. At his side, the Tunisian actress and producer Anissa Daoud and the Rwandan filmmaker Joel Karekezi.

”He was in love with this festival and he transmitted this love and passion to the whole team’,’ Director General of the National Center of Cinema and Image, Chiraz Laatiri said remembering the late director of the Carthage Film Festival, Nejib Ayed.

Laatiri, ended her speech by officially declaring the start of this year’s edition of the festival which was named after Nejib Ayed.

The opening ceremony was concluded by the screening of the Tunisian film The Scarecrows’ by Nouri Bouzid. The film depicts the story of Zina and Djo coming back from Syria in December 2013 to face a Tunisian society not willing to forgive. The two characters deal differently with their coming back and end up with different destinies.