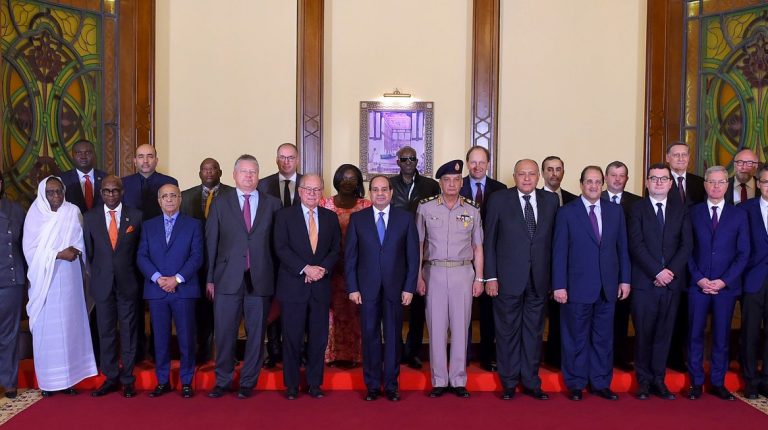 President Abdel Fattah Al-Sisi received on Sunday several international figures participating in the meeting of the Munich Security Conference’s “core group,” which is currently being held in Cairo.

Wolfgang Ischinger, president of the conference, led the attendees in the meeting which was presented by Ministers of Foreign Affairs and Defence and heads of intelligence services in a number of countries.

According to a statement from the presidency spokesperson Bassam Radi, the President expressed hope that the discussions of the current meeting in Cairo will lead to constructive proposals to deal with current and evolving challenges, both at the regional and international levels.

Furthermore, Al-Sisi stressed the importance of strengthening international solidarity to face common security risks and finding solutions to the causes of instability, especially in the Middle East. He also said that Egypt is exerting all possible efforts in support of regional security and stability to contribute to the comprehensive development of societies.

The President said that the regional situations in the Middle East and Africa need to be described in a realistic manner, free from being influenced by Western patterns and models. Regarding the Egyptian approach in dealing with crises in the region, Al-Sisi said it is based on a number of fixed determinants.

The most important is to preserve unity of the national state, support and protect national institutions as the fundamental arm of the stability of states, support national armies, countering the proliferation of armed militias and terrorist organisations, political settlement of crises, and enforcing the will of the people to achieve their future.

Egypt’s approach is also based on not interfering in other countries’ internal affairs.