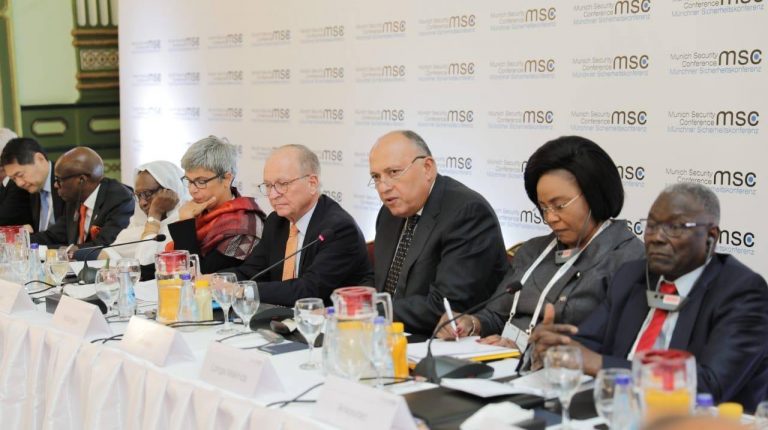 Egypt’s Minister of Foreign Affairs, Sameh Shoukry, reviewed the main challenges that the Middle East is facing, especially terrorism, illegal migration, and climate change, during his Monday speech in the closing session of the meeting of the Core Group of the Munich Security Conference (MSC) held in Cairo for the first time.

Shoukry noted that terrorism requires international cooperation to combat terrorist groups and bodies that fund them.

The meeting was held in the presence of Wolfgang Ischinger, president of the Munich Conference on Security, the ministers of foreign affairs and defence of Arab and African countries, in addition to several foreign ambassadors, and representatives of regional and international organisations.

According to a statement by the Foreign Ministry spokesperson Ahmed Hafez, Shoukry stressed during the meeting the importance of reaching a comprehensive political settlement as part of any sincere attempts to achieve peace and stability in the Middle East.

He particularly mentioned the Palestinian Cause and the Libyan and Syrian crises.

The minister said that Egypt adheres to its firm position based on the principle of achieving security and safety of the peoples of the countries of the region, while preserving national institutions and sovereignty of states.

Shoukry also reviewed the challenges of peace and security in Africa, pointing to the Sahel region in light of the complex problems that increase the volume of illegal immigration flows.

The positive developments in the Horn of Africa and the Great Lakes regions were also addressed in the minister’s speech.

On Sunday, Shouky reviewed in the opening session of the meeting, the main challenges that the African continent is facing, especially terrorism and extremism, as well as organised crime, human trafficking, and arms smuggling.

This reinforces the special importance of “preventive diplomacy” to avoid new crises, as well as mediation efforts to resolve existing conflicts. Shoukry also stressed the principle of preserving sovereignty of states.

The Munich Security Conference is an annual conference hosted by the German city of Munich addressing international security and foreign policy. It was held for the first time in 1963.