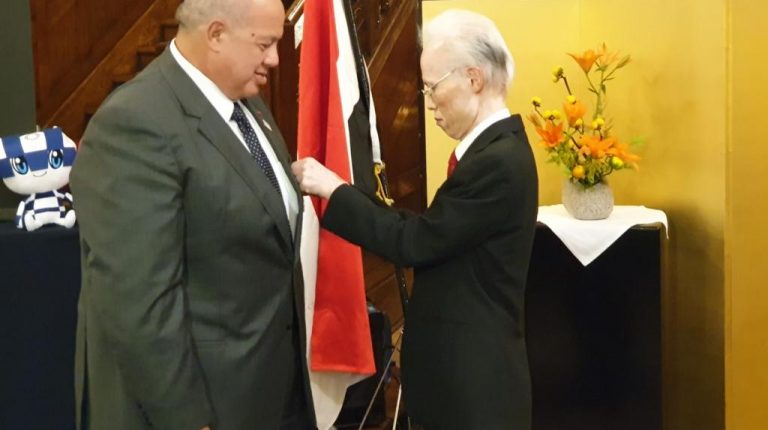 The Japanese ambassador to Egypt Masaki Noke handed over the Order of Rising Sun to the Egyptian judo legend Mohamed Rashwan on Monday evening for his fair play against his injured Japanese opponent Yasuhiro Yamashita in 1984 Los Angeles Olympics.

The Rising Sun Order was first established in 1875 by Emperor Meiji, awarded to distinguished figures in the fields of international relations, promotion of Japanese culture, or advancements in their fields in general.

The order is a recognition of Rashwan’s fair play against Yamashita in the LA Olympics open-weight final, as Rashwan avoided targeting the injury and took second place, the ambassador explained over his speech.

“We appreciate Rashwan’s efforts to spread the good values and respect through judo. Rashwan’s story in LA Olympics was included in the curriculum of preparatory schools in Japan as role model of fair play,” he noted.

Notably, one year after the LA Olympics, Rashwan won an award from the International Fair Play Committee for his conduct and the respect he had shown.

Japan is keen on boosting the joint cooperation with Egypt in the fields of sports, the ambassador told Daily News Egypt on the sidelines of the event, adding, “the most recent cooperation is the Egyptian judo national team’s camp in Japan for training ahead of the participation in African Judo Championships 2019 where they had an excellent performance.”

The Japanese embassy will continue pushing the sports cooperation with Egypt especially in exchanging sports expertise, the ambassador said, noting that young Japanese volunteers are always in Egypt for training Egyptians in schools and youth centres.

For his part, Rashwan expressed his happiness with the award as it came after his retirement, adding, “after very long time, Japan is still remembering the story of 1984. The award means a lot to me as it comes a few days after Japan’s new Emperor Naruhito proclaiming his enthronement to the world at the Imperial Palace on 22 October.”