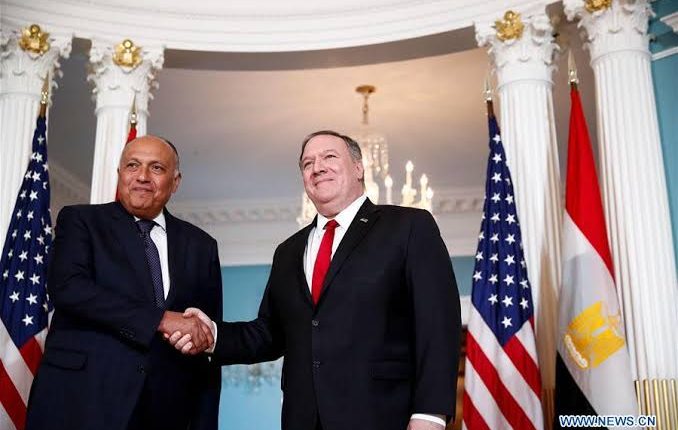 They talked about the expected meeting between the foreign ministers of Egypt, Ethiopia, and Sudan in Washington to resolve the dispute over the GERD. The meeting comes upon an invitation of the US administration, Egypt’s foreign ministry announced a week ago. However, the date of the meeting has not been specified yet.

“Pompeo expressed the understanding of the US administration of the significance of this issue and the need to reach a fair agreement that takes into account the interests of the three countries,” the Egyptian Foreign Ministry said in a Monday statement.

Separately, Shoukry renewed Egypt’s rejection to the “invasion of the Syrian territories,” calling for an immediate commencement to the political process according to the United Nations Security Council Resolution 2254.

Both agreed on continuing joint efforts of counterterrorism within the framework of International Coalition Against the Islamic State (ISIS).

Meanwhile, Shoukry praised the US military operation that led to the killing of Islamic State leader and the most wanted terrorist in the world Abu Bakr Al-Baghdadi on Saturday in northern Syria.

Al-Baghdadi blew himself out during a US overnight military operation near Barisha, Syria on Saturday, US President Donald Trump declared on Sunday.