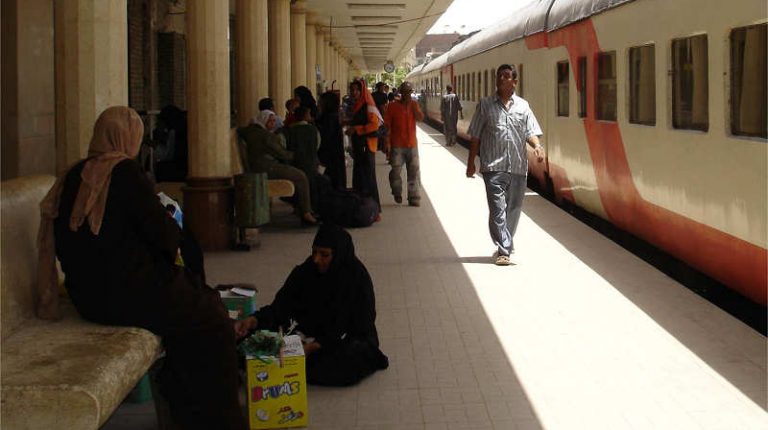 Egypt’s Prosecutor General Hamada El-Sawy on Tuesday ordered the pre-detention of a conductor accused of forcing two young men to jump off a moving train, for four days pending investigation over “reckless endangerment and committing actions that led to the death of one of them and the injuring of the other.”

Conductor Magdy Mohamed asked Mohamed Attiya and Ahmed Samir, both in their early twenties, to pay tickets in an Alexandria-Cairo train No. 934. The two men told him that they could not afford to pay the tickets, according to the prosecution investigation.

The conductor then opened one of the moving train’s door, while it was slowing but still in motion, and threatened them to pay the tickets otherwise he would present their national IDs to the police station for a warrant, or to jump from the moving train, the investigations added.

The two men, being forced, jumped from the moving train while it was passing from an abandoned train station before Tanta, named Defra. As a result, Attiya died, Samir was bruised.

The prosecutor general called upon all those in charges of services-related ministries and public utilities to raise awareness and entrench the faith among their employees that the aims of public services are achieving the public interest and that the priority of this interest is marinating human life and dignity.

The head of the train is also under investigation and temporarily suspended from work.

On Tuesday, Minister of Transportation, Kamel El-Wazir, visited the family of Attiya to offer condolences and apologies. El-Wazir, describing the incident as “inhuman and wrongdoing”, asserted to the victim’s family that those responsible will be “severely punished,” the ministry said.

The government released an amount of EGP 100,000 as compensation for the family of Attiya and EGP 20,000 for his wounded friend.

In a similar context, the ministry said on Tuesday it will prepare a rehabilitation programme for all railway workers and the officials who deal with the public.

Earlier, El-Wazir went into intensive criticism when he said in televised statements that “the two young men took the first-class train while they did not have the money, while they could take an ordinary train that you can afford, but this is not an excuse to what happened.”

Since Monday, a hashtag dubbed “the martyr of the ticket,” has been trending on Twitter and Facebook, as social media users harshly criticizing the death of a young man for not affording to pay a ticket, other users demanded the resignation of El-Wazir.