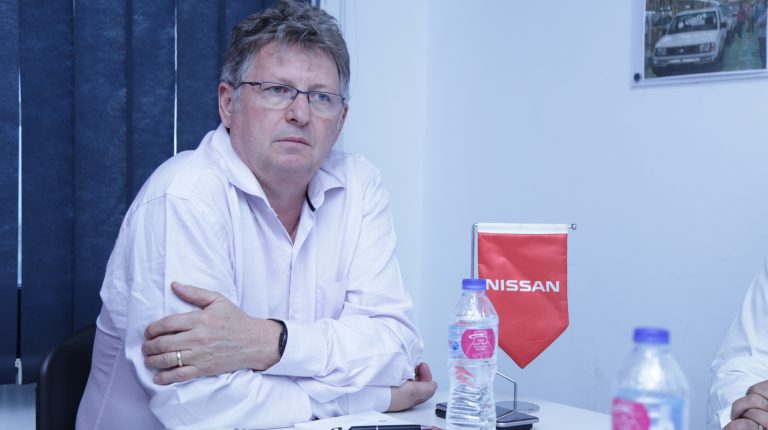 Chairman & Managing Director of Nissan Motor Egypt, Mike Whitfield, questioned the car sales decline in Egypt. Speaking to Daily News Egypt, Whitfield commented on the situation of the automotive industry; When one considers the population exceeding 100 million habitant and economic GDP growth rate of over 5% with a relatively low car ownership ratio of 62 vehicles per 1000, adding to that the forecasted production of about 65,000 only with relatively low levels of localisation, it clearly highlights the need for a clear vision and policy framework going forward to realise the true potential.

Nissan’s man in Egypt believes that the automotive industry in the country should witness a steady increase in the annual industry volume to reach 400,000 cars during the coming 10 years, at this level it makes a clear case for great localisation; however, this requires strong collaboration from all stakeholders, car manufacturers, components suppliers and the government. We need to look at ways of growing the local market and Ecosystem such as access to affordable finance and leasing programs.

He stressed that Nissan sees Egypt as a very important market, and looks forward to growing its presence in the market.

Whitfield said that the real opportunity in the local market is to focus on the growth of localisation and real local value add. To truly promote the local automotive industry, it is necessary to first localise the feeder industries and measure the local value added in line with global norms, Whitfield stressed.

Nissan will continue to optimise its value add and Whitfield feels that one key area of opportunity in the short term would be the export of automotive components.

He explained that the advancement of the feeder industries will increase job opportunities, as each new job opportunity inside Nissan’s plant will create four indirect jobs outside the factory, whether in components factories, transportation, or suppliers of raw materials.

Egypt enjoys many advantages that can help with the advancement of the automotive industry, mainly the high population density, large natural gas reserves, high economic growth rate, and the strategic location with huge logistic capabilities, but is the country that needs a clear and constructive strategy to benefit from these factors, Whitfield mentioned.

He set the Moroccan and South African experience in the automotive industry as an example. Morocco managed to be one of the largest automotive exporters in the region, Whitfield believes it is not impossible for Egypt to reach that level if all stakeholders work together.

A positive sign is the government’s clear desire to localise the automobile industry and turn Egypt into a regional automotive centre.

Regarding the date of releasing the new edition of Nissan Sunny, Whitfield ruled out to launch the car locally simultaneously with the world markets, since it will take some time to adjust the local production line and secure local components of the car, in addition to training workers to assemble the car.

He added that it is more feasible to import cars today from the company’s factories in Europe rather than manufacturing them locally to offer them at a competitive price giving the recent customs agreements.

Nissan’s first goal when assembling any new model locally is to localise as much as possible of the car’s components, so that the company can offer the vehicle at a competitive price for customers, he noted.

On a different note, he declined to comment that Nissan aims to establish a new plant in Ain Sokhna, stressing that the company’s factory in the 6th of October City currently produces approximately 20,000 cars a year and this is not its maximum production capacity, as it can extend its production to 50,000 cars a year. However, if the local market grows, Nissan would certainly look at increasing its capacity.

Moreover, Nissan Egypt is currently evaluating its participation in the national project of replacement and renewal of 16-passenger transport vehicles.

Whitfield affirmed that Nissan’s future plans include the introduction of electric cars in Egypt, especially Nissan Leaf, one of the most successful and famous electric car models in the world, but the company will not do so until the required infrastructure is available across most of the country.

In 2020, Nissan is planning to introduce the new edition of Juke, though it remains dependant on the Brexit standings, along with some technical additions to the Qashqai model.

Noteworthy, Whitfield also served as managing director of Nissan South Africa and sub-Saharan Africa until May for nearly 11 years. He first joined the company as a marketing management trainee in 1981. He has held several leading positions, such as managing director of Nissan North Europe.  Currently, Whitfield serves as the chairman of Nissan South Africa & Sub-Saharan Africa, in addition to his role in Nissan Motor Egypt.