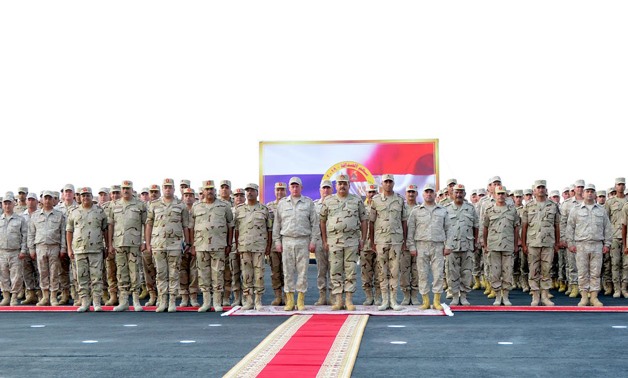 Egyptian, Jordanian, and Pakistani special forces have started last Friday a joint military drill, named “The Dawn of the East 1″, at the National Counter Terrorism Authority’s (NACTA) headquarters in Pakistan, and will last until 8 November.

Upon the arrival of the forces, Momtaz Hussien, the chief of Pakistan’s special forces, delivered a welcome speech to participant forces, stating that the exercise comes within the framework of developing military ties between the three armies to the level of partnership and exchange of expertise in the counterterrorism field.

The exercise will include training in inspecting, searching, and confronting explosives, as well as medical aid operations.

Simultaneously, the Egyptian and Russian air defense forces started the “Friendship Arrow 1” joint military exercise which will last for two weeks in Egypt.

According to a statement by Egypt’s Armed Forces, the exercise comes within the joint training plan carried out by the Egyptian army with friendly countries to strengthen military cooperation.

The commander of Egyptian Air Defense Forces, Ali Fahmy, welcomed participant forces and conveyed greetings from the Minister of Defense, Mohamed Zaki, and the Army Chief of Staff, Mohamed Farid, to the Russian side.

Fahmy said that this training is being held for the first time on the Egyptian territory, which confirms the depth of the partnership and strategic cooperation extended throughout history between Egypt and Russia.

Also, the Commander of the Russian Joint Forces, Valery Chernysh, gave a welcome speech to participant troops, praising the results achieved by the Egyptian air defense forces in military competitions that took place in Russia.

He also stressed the importance and depth of strategic relations binding the friendly countries of Egypt and Russia.