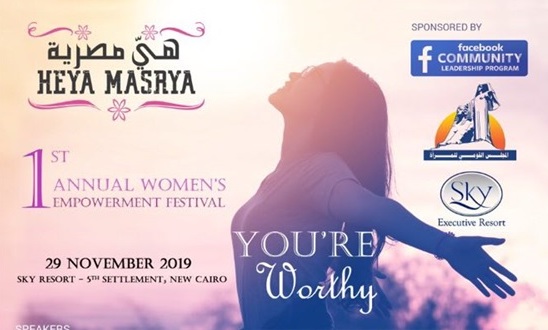 The Egyptian women festival entitled “Haya Masrya”, Arabic for she is an Egyptian, will be held under the auspices of Facebook for the first time and the National Council for Women (NCW) on 29 November at Sky Resort located in Fifth Settlement.

The festival is a one of the initiatives from the group of Egyptian Single Mothers, that was founded by Nermin Abou Salem, with a membership reaching 65,000 females.

Notably, Abou Salem was selected as a community work pioneer and a community ambassador for Facebook among 115 winners across the world as a culmination of her efforts in supporting female breadwinners across Egypt.

Abou Salem stated that the Haya Masrya festival is an Egyptian cultural, entertainment, and marketing festival for Egyptian women. Its goal is to send a message of love, appreciation, respect, and support to Egyptian women and to provide advice and gifts, all of which will be free of charge.

The festival also aims at supporting the idea of women`s ​​economic empowerment, social cohesion, as well as spreading awareness and promoting the idea of ​​social integration among all women. It also targets providing psychological and moral support for Egyptian women and honouring single mothers.

Also, during the festival, Fostan Melwan film (colorful dress) will be screened, which is a short feature film that explains the concept of female independence, aiming to abolish its misconceptions in society..