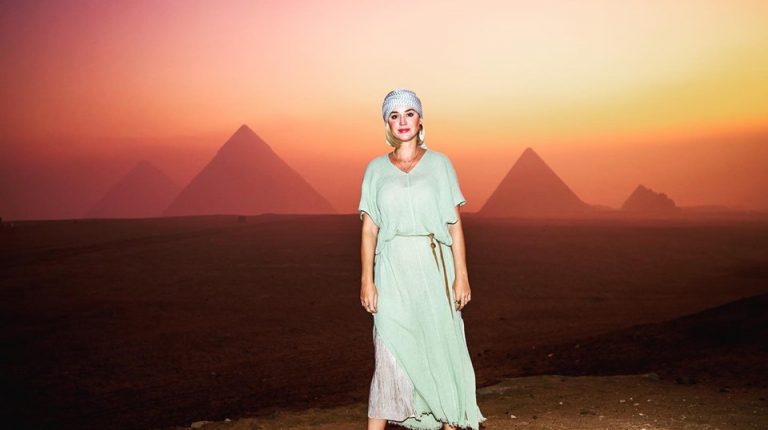 Following the trails of hundreds of celebrities who come to the land of Pharaohs to celebrate their special occasions, America’s barbie Katy Perry visited Egypt over the last weekend with her superstar fiancée Orlando Bloom to celebrate her 35th birthday.

Photos of the couple, who announced their engagement during last Valentine’s Day, have spread over social media showcasing their visits to different places across the country, before Perry confirmed her trip with her husband-to-be and mother through a post on her official Facebook page.

The Dark Horse singer referred to the ancient Egyptian civilisation in her celebration, highlighting the connection she feels with it.

“Ancient Egyptians believed that when you pass on, your heart had to be weighed. It had to be lighter than a feather to be qualified for the trip to the afterlife. My mother has called me feather since I was a little girl, and I hope after all is said and done, my heart is as light as one. This is 35 [at the] Egyptian Pyramids,” she wrote.

Moreover, Bloom, who starred in the Pirates of the Caribbean, expressed his astonishment with the treasures of ancient Egyptian civilisation, stating “it’s like looking out over the entire cosmos. Egyptian magic got my heart open to a download of love for my Scorpio’s, and wonder women both celebrating their birthday.”

The couple shared several photos they took together with the Giza Pyramids in the background. Perry is known for her fascination with the Pharaohs which was highlighted in her ‘Dark Horse’ music video.