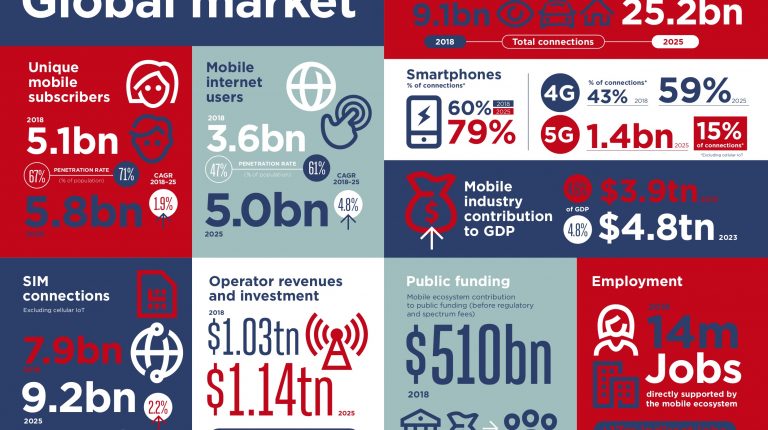 By the end of 2018, around 5.1 billion people across the world were subscribed to mobile services, accounting for 67% of the global population, GSM Association (GSMA) said in a report.

The report forecasts an average annual growth rate of 1.9% between 2018 and 2025, which will bring the total number of mobile subscribers to 5.8 billion (71% of the population), 5 billion of whom will be mobile internet users.

A total of 1 billion new subscribers have been added in four years from 2013 to 2017 (representing an average annual growth rate of 5%), but the speed of growth is slowing.

Of the 710 million people expected to subscribe to mobile services for the first time over the next seven years, a half will come from the Asia Pacific region and just under a quarter will come from Sub-Saharan Africa.

Meanwhile, mobile technologies continue to make a significant contribution to socioeconomic development around the world. In 2018, mobile technologies and services generated $3.9trn in economic value (4.6% of GDP) globally, a contribution that will reach $4.8trn (4.8% of GDP) by 2023 as countries increasingly benefit from the improvements in productivity and efficiency brought about by increased take-up of mobile services. Further ahead, 5G technologies are expected to contribute $2.2trn to the global economy over the next 15 years.

Furthermore, GSMA indicates that the connectivity gap also continues to close, citing that over the next seven years, 1.4 billion people will start using mobile internet for the first time, bringing the total number of mobile internet subscribers globally to 5 billion by 2025 (over 60% of the population).

4G takes the lead, while commercial 5G is now a reality

The report indicates that in 2018, 4G overtook 2G to become the leading mobile technology across the world, with 3.4 billion connections accounting for 43% of the total user base (excluding licensed cellular IoT).

4G will soon become the dominant mobile technology, particularly across developing markets, surpassing half of global mobile connections in 2019 and reaching 60% in 2023.

Meanwhile, 5G is now a reality. Following commercial launches in the US and South Korea towards the end of 2018, 16 other major countries will have launched 5G networks by the end of 2019. In parallel, 5G smartphones are set to be released in the first half of the year and WRC-19 in October and November will have an impact on the future of 5G.

While it will take some time for 5G to hit critical mass, some markets will see relatively rapid growth (for example, South Korea, US, and Japan). Three factors will affect the speed at which 5G is adopted and the value that it will generate: the opportunities for value generation, cost considerations, and deployment dependencies.

According to the report, mobile operators will invest around $480bn worldwide between 2018 and 2020 in mobile capex to support this generational shift and further drive consumer engagement in the digital era. Half of this will be from countries expected to have launched 5G by 2020. However, since the majority of 5G deployments will happen post-2020 (64 markets over the 2021–2025 period, bringing the total to 116), the report expects capex then to grow above the approximate $160bn expected in 2020.

MENA subscription penetration to hit 69%, smartphone adoption to 74% by 2025

Asia-Pacific and MENA are the most improved regions, due to significant improvements in scores for infrastructure, content, and services.

98% of Millennials have smartphones: research