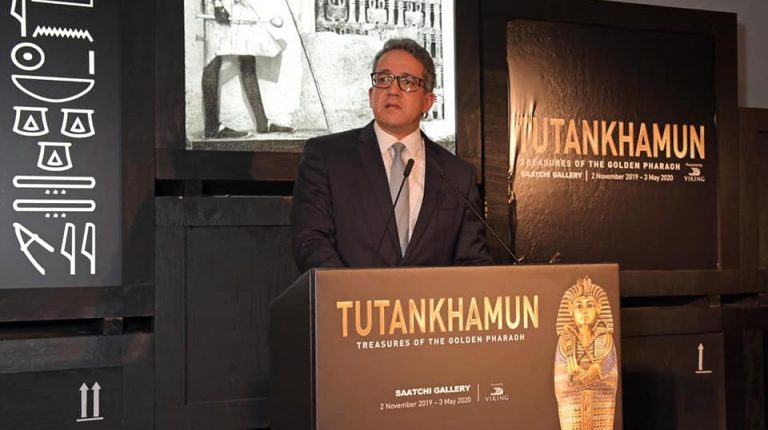 Egypt’s Minister of Antiquities, Khaled Anany, inaugurated Tutankhamun temporary exhibition on Friday in London, in a gala event that was attended by some of Britain’s elite and the veteran Egyptologist Zahi Hawas.

The exhibition, titled “Tutankhamun: Treasures of the Golden Pharaoh”, is to settle for six months at the city’s Saatchi Gallery. The young pharaoh’s exhibition showcases 150 antiquities from the pharaoh’s personal belongings, of which 60 pieces are travelling out of Egypt for the first time. London comes to be the young pharaoh’s third stop after Los Angeles and France.

The belongings of Tutankhamun on display are part of its grand tour in which it is planned to visit five other European counties within its 4-year-temporary exhibition.

Egyptian footballer Ahmed Hegazi was also among the attendees whom showed their support to their Pharaoh’s exhibition.

In his speech, Anany said that the 285,000 tickets were sold before the exhibition opened its doors, which is more than the number of tickets sold before its opening in France which attracted over 1.4 million visitors, becoming the most visited cultural event in the history of France.

“Today, the young king comes bringing sunshine to London, along a letter of love and peace from Egypt to the British,” Anany said.

Anany invited attendees to visit the Grand Egyptian Museum (GEM) which is to open its doors to the public in 2020, as well as the Sharm El-Sheikh Museum which the minister is currently preparing.

The exhibition will last until 3 May 2020 before it starts another journey in four other countries, including Australia and South Korea. The tour will last until the end of 2022. After the tour comes to an end, the relics are to return back to the GEM, where they will join the rest of the 5,000 relics found at the king’s burial chamber in 1922.