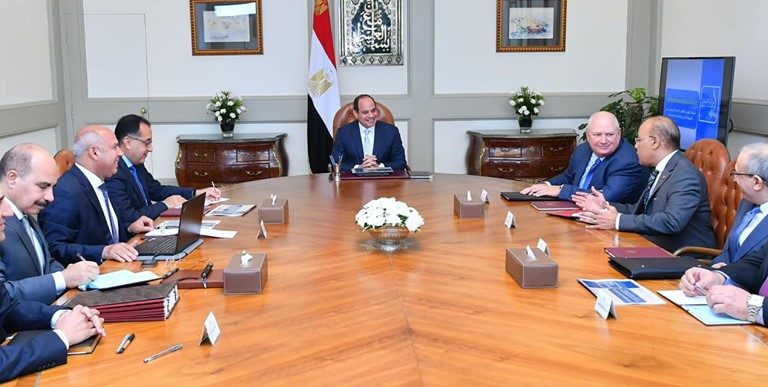 Egyptian President Abdel Fattah Al-Sisi has directed on Saturday the government to start a holistic plan to upgrade the railway system, following the killing of a passenger after he was forced to jump off a moving train as a result of not paying for his ticket.

According to a statement released from the official spokesperson of Egypt’s Presidency, Al-Sisi also met with Prime Minister Mostafa Madbouly, Minister of Transport Kamel Al Wazir, Chairperson of US Progress Rail Locomotives (PRL) company William Peterson, and a number of senior officials of the company.

“The meeting dealt with the follow-up agreement between the Ministry of Transportation and PRL for the supply of new railway tractors as well as modernising and upgrading the efficiency of the current available tractors at the ministry,” Egypt’s presidency statement read.

The statement added that during the meeting, Al-Sisi praised the cooperation between the Egyptian government and PRL, pointing out that the state aims to develop the transport system in Egypt and raise its efficiency to cope with the international standards.

Al-Sisi also stressed the special importance of railway projects, in light of their direct impact on millions of citizens, directly giving the highest priority to maintaining full safety standards and ensuring the provision of integrated services to citizens, the statement read.

Although it is the second country in the world to get trains during the nineteenth century after England -where the train was first used in 1814- Egypt suffers from a constant show of train accidents on a daily basis.

The latest was when a girl fell off the door of a train in Upper Egypt, leaving her with a broken foot and wounds on her head.

Preliminary investigations published through local media reports revealed that the 23-year girl-student fell from the doors of a train heading from Beni Suef towards Al-Fashn, while standing on the door of one of the train carriages.

The incident sparked fierce criticism of the Egyptian Ministry of Transportation on social media, where some demanded the need to investigate the case, stressing that incident confirms the lack of adequate safety and protection.

A few days earlier, a young man was killed while another was injured after they jumped from the Alexandria-Luxor train while the train was in motion. They were forced to jump off for not paying their ticket, causing outrage amongst the public.

According to the medical report out on the incident, the two jumped from the train while it was at high speed, one of them fell under the train wheels, and died isntantly, while the other was injured.

The medical report revealed that the first man arrived at Tanta Hospital with his head separated from the body, and suffered from various injuries, while the second young man was injured by a foot amputation, with injuries in his thigh, abdominal, back, and injuries scattering parts of the body.

Last February, a train accident in Egypt’s railway station killed and injured dozens of people, leading to the dismissal of the former Minister of Transportation. The incident was due to a train collision with the sidewalk which caused a powerful explosion.

The main defendant in that incident was the driver of the locomotive that collided with the pavement, he faced charges of negligence at work which resulted in damages to public property.

According to a report issued by the Central Agency for Public Mobilization and Statistics (CAPMAS), train accidents in Egypt during the period 2003-2007 amounted to about 16.174 accidents, while 2017 witnessed the most the most accidents with 1657 cases.

Egypt has 28 railway lines with a length of about 9750, extending to 760 stations, covering all parts of Egypt. More than 1800 trains go back and forth on these lines. Nearly two million passengers use these lines on a daily basis, making the railway the most important means of transportation in Egypt.