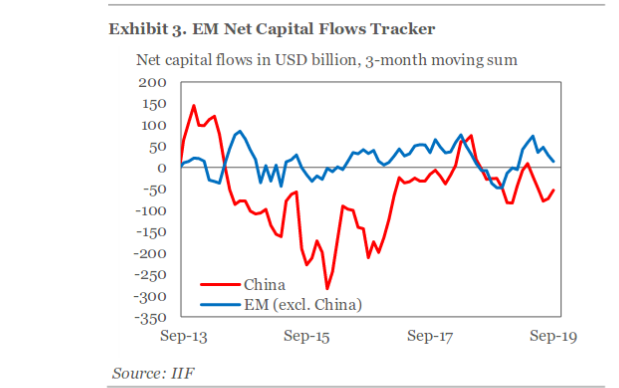 “Ongoing trade tensions and resulting uncertainty have impacted financial flows meaningfully, but global supply chain disruption is still limited. This bounce back in sentiment is directly explained by the “truce” in the trade conflict,” according to the IIF.

“The positive figure in our October tracker is explained mainly by debt inflows, totaling around $21.3bn. While China equity flows were $2.7bn, EM x/China (including china) flows came in at $1.5bn,” it continued.

The IIF believes the outlook for equity flows to non-China EM remains difficult given the large amount of hot money that has already gone to EM in recent years.

“While we are “glass-half-full” on the global economy, the persistent weakness of EM currencies versus the dollar is worrying. There are many different forces at work currently, including geopolitical uncertainty,

weak commodity prices, and idiosyncratic difficulties. But perhaps the single common denominator is nonresident capital flows to non-China EM, which have been successively weaker for every EM-bullish catalyst,” the IIF explained.

The IIF declared that in August, the outcome was broadly uniform across regions, explaining that the debt flows in EM Asia were $11.7bn, followed by Latin America (Latam) by $3.9bn, Africa and Middle East (AFME) by $3.6bn, and EU Europe by $2.1bn.

Regarding equity flows, only EM Asia saw inflows of $5.4bn. All other regions experienced outflows, ranging from $0.7bn in EM Europe to $2.2bn in Latam.

“We estimate our broader measure of net capital flows to EM (including banking and FDI flows) was $31.4bn in September, almost twice as large as the net outflow in the previous month. China contributed around 50% to the September number (-$17.3 bn),” it revealed.