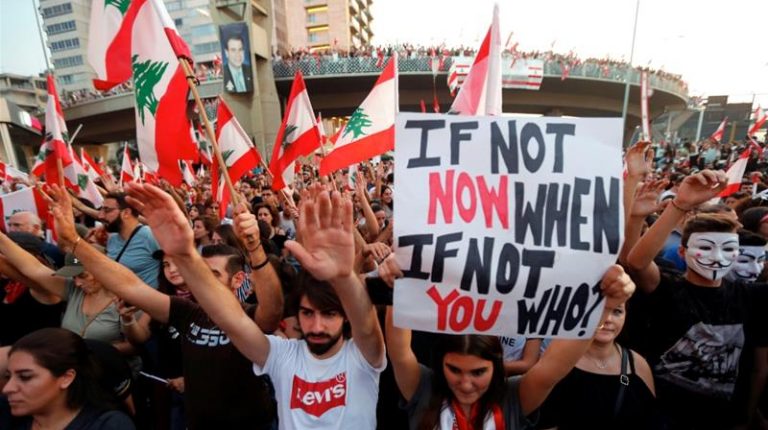 Lebanon’s mass protests entered its third week amid renewing calls for the resignation of the whole government, including the president. However, the banks operating in the country reopened their doors last Friday for customers after two weeks of closure, Reuters said.

Last Friday, Hassan Nasrallah, the leader of Hezbollah, called for forming a new Lebanese government, which would listen to the calls of protesters and work to restore confidence.

Lebanon is expected to witness mass demonstrations on Sunday after the protesters announced an invitation to gather in central Beirut, participating in a unified demonstration. The demonstration aimed to form a new government, hold early parliamentary elections, and launch an anti-corruption campaign.

Although Banque du Liban, the central bank of Lebanon, has pledged not to impose capital controls when banks re-open, measures that could hamper the currency inflows, dozens of activists briefly stormed the headquarters of the Association of Banks in Lebanon (ABL) last Friday, before they were forced out by riot police.

The mass protests in Lebanon have prompted President Michel Aoun last Thursday to call for the establishment of a technocratic government, pledging to move away from the sectarian-based political system to a civil state. He promised also to combat corruption and enact serious reforms.

“Ministers should be selected based on their qualifications and experience, not their political loyalties,” Aoun said.

However, his speech was not welcomed by demonstrators who chanted “The people demand the fall of the regime,” as a response to the speech.

Aoun’s speech came as the protesters tried to block roads that were reopened recently.